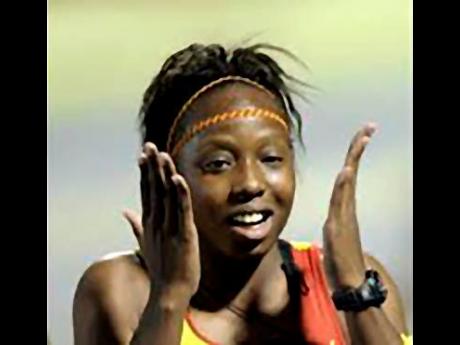 Shauna Helps, the former ISSA/GraceKennedy Boys and Girls' Championships Class Three Girls' 100m record holder, believes that having world champion Shelly-Ann Fraser-Pryce as her training partner will help to make the transition to the professional ranks.

Helps joined MVP track club last fall after spending four years at Florida State University (FSU). And now that she is training beside Fraser-Pryce, who won her fifth world title in the women's 100m at the World Athletics Championships last year, the 22-year-old hopes that the tips she has been getting from her fellow Wolmerian can help her to become successful at the senior level.

"I learn from Shelly every day. I tend to ask her questions because sometimes you can get lost in the programme because it is so big, and so she gives me tips, and she is a role model," Helps told THE STAR.

Helps opened her 2020 season at the Milo Western Relays at the G.C. Foster College last weekend with a 7.67 seconds in the 60 metres.

"I decided to make the move back to MVP because of Franno's (Stephen Francis) track record. It was a no-brainer," she said.

The former Wolmer's High School for Girls standout had to watch from the stands most of her final year at FSU as a stress fracture in her left femur derailed her season.

"A big part of what I am doing this year is staying healthy because when I stay healthy, I perform well. Last season, I was hurt. I had a stress fracture in my left femur," Helps explained.

The injury prevented her from improving on her personal-best times in the 100 and 200 metres, a feat she managed to achieve every other year during her collegiate career.