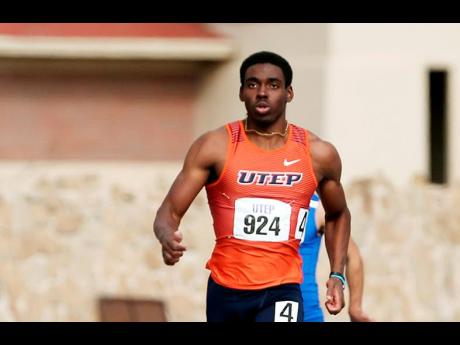 Sean Bailey, the Jamaican quarter-miler who represents University of Texas El Paso on the US collegiate circuit, continues his quest to make his first senior team when he won the 400m at the New Mexico Collegiate College Classic in a season-best time of 46.37 seconds last Saturday.

Bailey, the younger brother of sprinting queen Veronica Campbell-Brown, is yearning to break into the senior ranks after an injury derailed his 2019 season after he emerged as one of a handful Jamaicans who ran faster than the qualifying standard for the quarter-mile event, 45.30 seconds, in the build-up to the World Athletics Championships in Doha last year.

"Sean is really focused on making his senior team debut. He was the fourth fastest Jamaican last year but unfortunately, an injury ruled him out, and he wasn't able to take part in the World Championships," said his coach, Davian Clarke, who is regarded as one of the finest relay runners in the country's history.

"We have been working on getting him stronger to prevent him having injuries, especially at key moments of the season."

"We are trying to ensure that he becomes one of the top three 400m runners at the collegiate level because history tells us that the top three collegiate quarter-milers always make it to the Olympics final," Clarke said.

Bailey has the seventh fastest time on the US Collegiate circuit thus far this season.