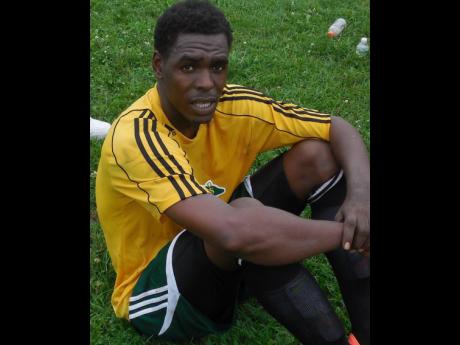 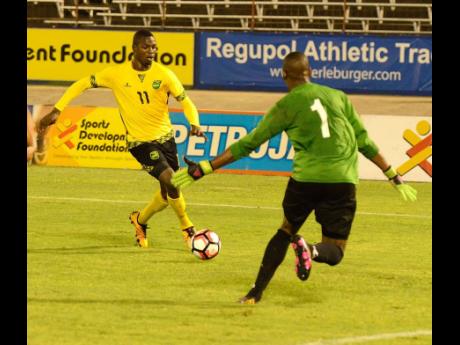 Corey Burke (left) tries to get past the Suriname goalkeeper Cladel Kohinor during the Caribbean Cup qualifier at the National Stadium in 2016.
1
2

Jamaican forward, Corey Burke, one of many local football stars who turned out at the Penwood Seventh Day Adventist church on Sunday to pay their last respect to former Waterhouse captain, Irvino English, said the former left-back was his local football idol and the one who inspired him to master his weaker left foot.

Burke, who attended Old Harbour high school and started playing for Rivoli United in the 2013/2014 campaign, said he didn't see much of the Waterhouse left-footer during his playing days. However, what he saw created a lasting impression, so much so that he decided that he wanted to use his left-foot as well as his inspiration.

"Growing up as a youth in high playing under-14, my coach was always calling me Irvino English and at that time I didn't know who this guys was. One day I asked him (coach) who is Irvino English and he told me it's a player who plays like me and looks like me. So he was someone who I had always asked about and did my research on and try to know how he played and what he did," he said.

"I did watch him play a few games before he went overseas and when I saw him playing for Waterhouse he scored and created a lot of goal and he had a different left foot from everybody that I knew, and that was the reason why I wanted to use my left foot. Because of Irvino English every day I would train hard on my left just to master my left foot and that was just because of him (English)."

He said eventually as he became more renown as a player, he got closer to English, who became a close friend and mentor, and he would spend many hours sitting and conversing with the former player on the sport they love.

"When I grew up and started playing for Rivoli we got closer before we went to the states, so we started to connect more. Then when I am here I would visit him in the community and chill with him and talk about football a lot. So I always visited him and reason about football and he has always given me good advice on how to improve as a player and improve my career. He was a good guy, so for this to happen it's really sad," he continued.

Burke recalled that when news of the incident broke he was at training in Austria and it left him devastated for days." I was in Austria when I heard the new. It was heart-breaking, I couldn't even train until a couple days after. It's really sad but I am really glad I got the chance to come to the funeral and pay my respect to this great footballer and person, for the last time," he said.

English won the Manning Cup title with Norman Manley high and the Premier League twice, with his community club, Waterhouse. He was also the league's leading scorer in 2006/2007 season with 18 goals.

Burke, now a prolific striker, played three season with Rivoli United before he was contracted to play overseas in the USL for Bethlehem Steel. He also played for Philadelphia Union in the MLS. However, he spent last season on loan in the Austrian Bundesliga with St Polten.