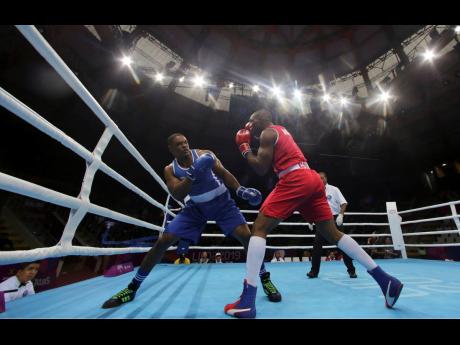 File Cristian Salcedo (right) of Colombia throws a punch to Ricardo Brown of Jamaica during the second round of their men’s heavy 91 kg semi-final boxing match at the Pan American Games in Lima, Peru, Tuesday, July 30, 2019.

Dewith Frazer, coach of Jamaican boxer Ricardo Brown, says the boxer has improved immensely under his tutelage and promised that Jamaica will see a new boxer the next time the Commonwealth bronze medallist turns out to fight.

Brown, who was recently ranked 16th in the super heavyweight class by the International Boxing Association, has been living and doing specialised training with Frazer in Canada for over a year now.

But according to Frazer, the former Olympian has been lacking some basic fundamentals, which is a result of his limited fighting experience. However, they have used the break caused by the coronavirus pandemic to iron out some flaws, as well as other aspects of his boxing.

"Ricardo is doing really well. During the pandemic, luckily, because he is living with me, we were able to train on a regular basis. We have been working on some fundamentals, because although he has been in boxing a long time, he has very limited skills because he has only 21 fights. But he's been using the time to get the fundamentals right and it has been useful during this time," he said.

He continued: "His body has changed because he has a strength trainer who works with him twice a week. He also does swimming to help him breathe, and he has a person that does stretching to ensure his body is in good form. So there are at least four people working with him on a regular basis.

"So he's excited about what he's learning and he's in great shape, and I would love to see the (National) championship schedule before the Olympics trials because it would be good to get him back in the ring, and I would also love for Jamaica to see the new Ricardo Brown," he added.

Because of the global pandemic, Brown has been unable to compete for much of this year. Nevertheless, Frazer is confident that with the preparation he has had he will be prepared for the Olympics qualifiers next year.

"Right now, with the Cubans and the Americans everything is high-tech, so we have to reach that level and do things similar. Since I have been working with Ricardo I have seen him fight a Cuban and an American (lost both fights). But at the time he fought them he was not getting the training he is getting right now. But Ricardo is here (Canada) with me to train and get whatever is necessary to get to that level," he said.