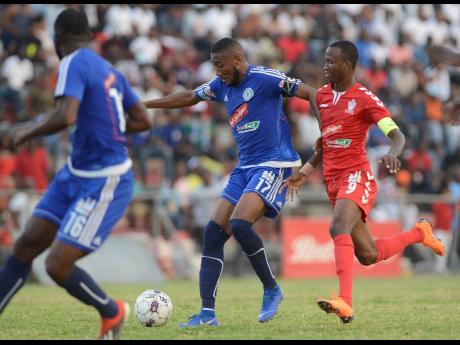 File Mount Pleasant’s Ronaldo Rodney (17) sheilds the ball from Rochane Smith (9) of UWI FC during the first leg of their quarter-final matchup at the Anthony Spaullding Sports Complex on March 24, 2019.

Mount Pleasant Football Academy are looking to advance their programme further as they seek to fill the role of technical director in the club with a UEFA-certified coach.

The football club from St Ann, in an advertisement in The Gleaner last week, is inviting local coaches with UEFA A or B certification to submit their applications.

Recently, the club appointed former Wimbledon midfielder Walter 'Wally' Downs as head of their youth academy. Paul 'Tegat' Davis will remain as the head coach of the premier league team, but Galloway said that in order to ensure the club is opening the doors to all applicants, they have extended the invitation to Jamaican coaches, six of whom they know have UEFA-certified badges.

"The FIFA standard state that your head coach must be of a UEFA B qualification. That is the requirement, so that is the reason why we have opened that gateway to see if there are any local coaches at that level. Jamaica has about six or seven of them but we have had no responses as yet. But nothing happens before the time, so we will wait on due process and try to select the best candidate at the end of the day," said general manager of the club, David Galloway.

He insisted that Davis will continue to be the team's coach, while the newly acquired coach will be placed in the technical director's role. He also added that the invitation was not limited to just local coaches. "It is extended (to overseas coaches)," he added.

The advert which was placed on page 3 in Section B of The Gleaner on Thursday read: "Mount Pleasant Football Academy invites applicants to fill the post of football coach. The potential candidates should have a minimum qualification of a UEFA A or B licence and experience working in a European academy."

It added that applications should be submitted to info@mountpleasantacademy.com and addressed to the club's chairman (Peter Gould), c/o the principal/director of the club.

Meanwhile, Galloway added that all the various coaches will continue working together to create the modern, professional club the chairman has envisioned. "All these coaches will work in hand in hand to continue building the Mount Pleasant Football Academy," he stated.