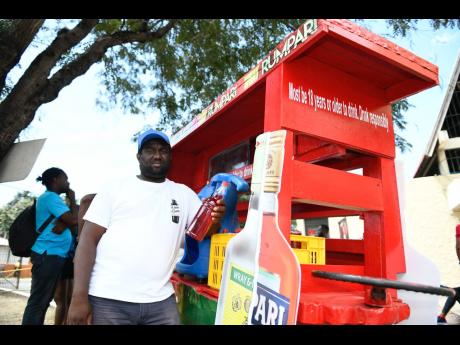 Xodus has returned this year with their Sip and Chip carts courtesy of the various band sponsors. The carts were added to the parade bevy to make the distribution of beverages more efficient.

Each cart is monitored by two to three Barcode Jamaica personnel.

However, there is a special one primarily manned by Ian Lewis a snow cone vendor.

The cart is branded by Rumpari which in its effort of achieving a throwback theme decided to do snow cone cocktails of Ting, Campari and White Rum.

Although it does not include the traditional mix of flavoured syrups Lewis says, “This cocktail is going to be a hit on the road.”

Lewis had been a snow cone vendor for about seven years and is happy to be a part of the Xodus carnival parade.

“It is all about the efficiency and my job today to handle the ice machine as the cart is pushed along the route, he said.