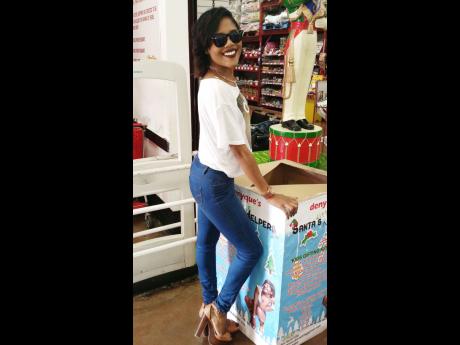 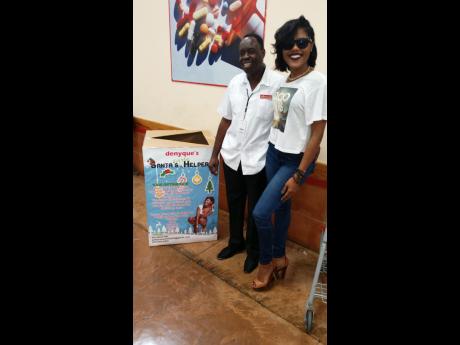 Contributed Denyque and Mega Mart Upper Waterloo Store Manager Livingston Clarke after they set up a drop box at the store on Monday.
1
2

Recording artiste Denyque is arguably one of the sexiest women around. She is also blessed with a heart of gold.

The stunning singer/songwriter has launched an initiative intended to make Christmas brighter for many of Jamaica's less fortunate children. Under the project dubbed Santa's Little Helpers, Denyque will on December 16 be visiting seven children's homes island-wide to deliver gifts and good cheer and she wants Jamaicans to be involved.

Denyque has selected five children between the ages of six and 10 years as her little helpers who will travel with her to the selected homes to bring gifts and cheer to the children.

Meanwhile, drop boxes are being placed at MegaMart and Fontana Pharmacy locations in Kingston, Portmore, Mandeville and Montego Bay and members of the public are being urged to donate gifts.

Those gifts, she said, should include, but are not limited to toys, diapers, books, and clothing.

"This is the first year of Santa's Little Helpers. My goal is to remind kids how important it is to give back at Christmas time. The season is one of love and giving and I think a lot of people in this generation have forgotten that that is what Christmas is about because everybody looks forward to receiving and nobody really looks forward to giving," she told THE STAR on Monday as she set up a drop box at MegaMart, Upper Waterloo Road in Kingston.

She said she is hoping that the initiative makes an impression on her fellow countrymen and women.