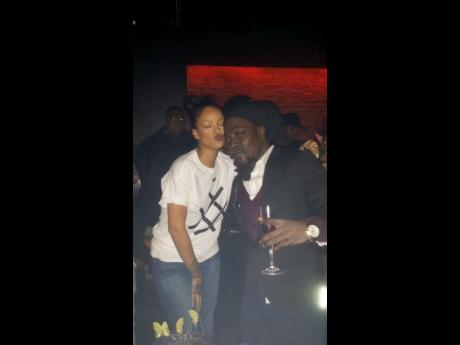 Contributed Junior Reid hangs with Rihanna during the show

When platinum-selling rap legend Busta Rhymes introduced reggae icon Junior Reid during a hip-hop concert as his "godfather", 30,000 fans cheered the singer and chanted his name.

"This man has been my godfather since 2006, and he is still my godfather today!" Busta Rhymes declared, before Reid energised the show with his signature One Blood song.

The event was the 'Busta Rhymes and Friends: Hot for the Holidays' concert which was held at Newark's Prudential last weekend in New Jersey, USA.

"It was a great feeling hearing that from Busta Rhymes, he's a great rapper and a really great friend," Reid said.

The special holiday concert featured special guest appearances from Lil Wayne, Puff Daddy, Mariah Carey, Lil' Kim and Sean Paul. The reggae singer has gained widespread acceptance in the hip-hop community in the US as evidenced by the attendance of Barbadian pop star Rihanna as Reid launched his Living Legend album in Dubai recently.

"I am just glad I can continue to represent reggae on the biggest platforms out there. I was on the 'Breakfast Club' on HOT 97, I did Fox News 5 as well; so I continue to rep reggae at the highest level. Rihanna came to my album launch and she told me I was one of her favourite reggae artiste, and I told her she is one of my favourite R&B artistes," he said.

Reid also said that he is looking forward to doing some work on Rihanna's reggae album.

In the meantime, he continues to promote his latest album, titled Junior Reid: The Living Legend, his first studio album in 12 years. It includes songs like Same Boat, Love You Back and Murda alongside rapper Lil Wayne.