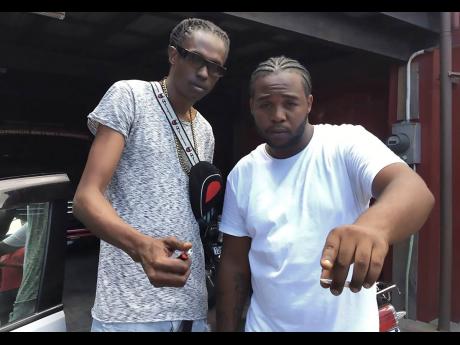 One of the producers of the single ' Motivation' by dancehall's most recent trending artiste, Teejay, is pleading with fans not to deface buildings to show their support for the song.

"It makes us know people are listening and I like that, but I don't want persons to mark on the walls of businesses, apartment complex or schools to show support, that's not the way. Just gwaan listen out for more from the artiste and our record label," said Jermaine 'Tu Finga' Parchment, founder of Deadline Records.

The track is getting plenty of attention from the public as streets across the metropolitan area are being spray-painted with the artiste's name and song title.

Deadline Records and Koloni One Production collaborated to produce the track, and the representatives are confident that no one from their team or Teejay's team is involved in the act.

"I am telling you facts that I am not the person spray-painting the walls and no individual affiliated with me have gone out of their way to do that as a means to promote the single," Parchment told THE STAR. "I don't know anyone who would do that, and the artiste and his team not going waste time and do that either."

The single was actually leaked online pending the official release date which, according to the producer, was to be decided for later this year based on Teejay having other tracks lined up.

"Following the leak, Akam Entertainment came on board to push the single on their YouTube page on Tuesday, April 2. I have grand expectations for the song but only hope people will continue to show it support and relate to the words," Parchment said.

Motivation has gained more than 50,000 views or listens on that YouTube channel thus far, and although appreciative of the promotion in the streets, the producer explains, "The direct number of persons that have searched for the song after seeing the graffiti would be hard to calculate."

He says the spray-paint method of promotion is not new to the dancehall scene as other artistes or songs have been promoted in a similar way across the island in the past.