‘I am not a mad man’ - Changa Changa defends ‘organic’ image 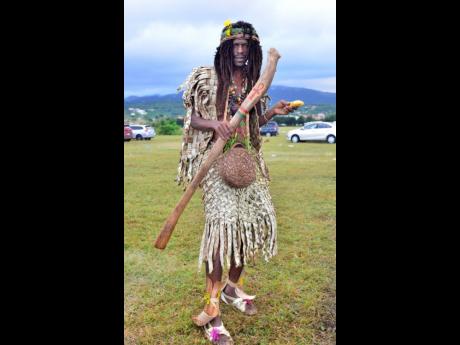 St James dub poet Changa Changa might not have had the opportunity to perform alongside other entertainers at Grizzly's Plantation Cove last Saturday, but he found other ways to put on a show for 'saluters' on the outside.

Literally dressed to the nines in an eco-friendly outfit, which he fashioned from head to toe from banana leaves, Changa Changa made a statement. Misinterpreted and misunderstood by many to be a madman of some sort, he describes himself as a revolutionary rather than a rebel.

Chanting, "A jus Changa Changa, the real 'ion dat, I nuh wear leaf fi intimidate nor I nuh wear it fi frighten no one but if a boy violate ... not nice. I nuh tek back talk, I nuh tek back chat. Yuh see Babylon livity I man bun dat. I nuh wear dem pants or dem shirt or cap. Yuh see Babylon uniform, I nah guh wear dat when I want a robe fi put on, I travel inna di jungle fi dat", he explained why he dresses the way he does.

The dub poet does not allow the judgements to suppress him. He says that if people ask, he can reason about it.

"I deh one deh I will socialise with people, but true ones and one nuh talk to I fi know me can talk. Me never see a madman dress like I yet, there are mad people dressed like regular people and me can reason pon it. Dis a culture, a real life nuh joke ting," Changa Changa explained.

He continued: "I doing this from school days, primary school to Herbert Morrison Technical. I do poetry and deejay, cultural and real organic lyrics about self, and I an' I trodding dem way yah ... talking to nature, talking to the trees and the bark come over, I so I discover I can do this, for more than 25 years; close to 30 years ago."

He said that every now and again, he finds persons interested in the 'organic' outfits and may order pieces, but his true calling is to be a great poet. He even said he got an opportunity one year from reggae artiste and the promoter for Rebel Salute Tony Rebel, but circumstances got the better of him.

"Tony Rebel a di bona fide. A few years ago him was giving I a chance, but true me never turn up last time, it look like it cause something fi change. I don't know supn'm between us. I don't know if him can look over it."

Public transportation was not the most convenient means the dub poet said, taking into account his natural attire.

"Couple years ago, it was harder, dem say me a madman, so taxi seh nuh madman can drive inna dem car. Dem time deh people nuh used to me like how dem love and respect me," he said.

"Now that more people get fi know me, I can get around easier."