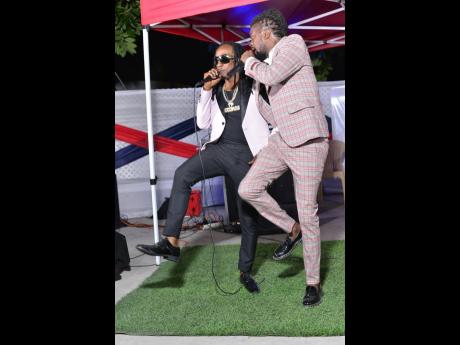 Twinkle Brain (left) performs with Beenie Man. The up-and-coming dancehall artiste said that he was overwhelmed that Beenie Man had turn up in person at his album [EP?] launch to show his support.

Up-and-coming dancehall artiste Twinkle Brain considers the King of Dancehall, Beenie Man, to be a a mentor.

The two have known each other for years, and the younger artiste says he has always received words of encouragement from the veteran. So when he launched his debut EP, Go Harder, three weeks ago, Twinkle Brain said he was overwhelmed that Beenie Man turned up in person to show his support.

"Beenie Man is a standout person in this industry. He is a legend in the business, and so it's a great feeling to know say him a embrace my talent as a young artiste, and see me as a future artiste who can do great things," he said.

"He is a mentor, a friend who always tell me say this journey nah go easy. He taught me never to be a quitter, and that's why me a 'go harder'.

Twinkle Brain, who was a contestant on the Magnum Kings and Queens of Dancehall competition in 2012, said he has been trying since then to get his foot in through the industry's doors.

"It's been a hilly journey so far. But yuh still affi fight. That's why the title of the album is so dear to me. We been a guh hard in this game, but we affi guh harder because of how this industry set," he shared.

Twinkle Brain said that the Go Harder EP showcases his versatility in music.

"It is a perfect title for the world right now because everybody in the world needs to go harder, no matter what field you're in; football, medicine, music. The world is on a go-slow, and so everyone has to try and step up their game," he said. The artiste, who is eyeing major accolades like the Grammys, says the reception to the EP has been positive.

"I want my music to live on for years. Even when I have passed away, people can still listen to the music and love it, and it new to dem like Bob Marley and all a di greats dem," he said.