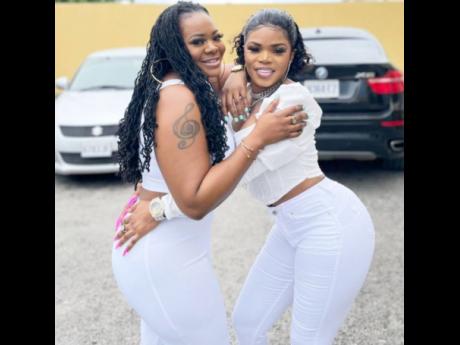 Stacious says lifting her voice against crime in Jamaica is high on her musical interests, which explains her recent collaboration with Queen Nikki.

The song, Dem Evil, debuted last week with visuals of the artistes being the change they want to see by calling out the criminality plaguing the country.

Dis we haffi tell the government, we nuh love how di country a run

Speaking to THE WEEKEND STAR, Stacious shared that Queen Nikki's label, Boysie Records, contacted her about a collaboration and that she wanted it to avoid cliches.

"I wanted the concept to be different, I wanted to speak about what was happening in our country right now," she said. "As females, we get bashed a lot for always singing about our sexual prowess, hair and nails, the trivial kinda stuff. It's easy listening, fun, I'm not gonna knock it, but then they figure that's all we do. So now this is totally a different side and it is highlighting a really big issue that we're having, so it's two-fold for us. We want to get the message out there and quiet the naysayers at the same time."

She reached out to New York songwriter Tenshan who wrote the song, and Boysie and IClips Records handled the production. The video was directed by Lagikz.

"Everybody is saying they like this direction and they want to hear more of these kind of songs coming from artistes, especially females and I think it's a welcomed change," Stacious said. "I just want the message to be heard and I just want people to understand that the onus is not just on the Government, we all have our part to play. We have to get this 'informer fi dead' culture out of we head and know seh the police can't police every community 24 hours a day. We have to get matters in our own hands, look out for each other more and weed out the unwanted people weh a create havoc inna we area."