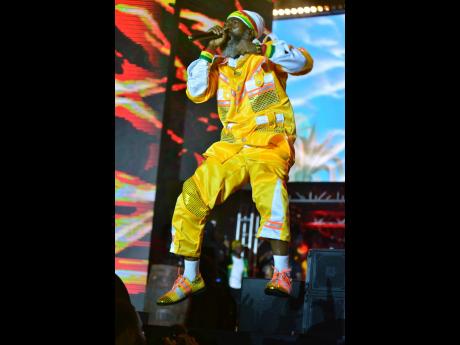 'The Fireman' Capleton is full of gratitude after walking away almost scratch free from an early morning accident along the Llandewey Road in St Thomas on Tuesday.

He has put the incident behind him and is focused on prepping for his live performance on Thursday at Acoustics Inna Di City.

"I'm just giving thanks to the Most High," the Jah Jah City singer told THE STAR. "I'm getting ready for rehearsals right now."

The Constabulary Communications Unit reported that at about 5:10 Tuesday morning, Capleton was travelling with three other persons when his vehicle hit a tree stump along the Cocoa Walk main road in Llandewey and overturned. He escaped with minor injuries.

His manager, Claudette Kemp, said that Capleton underwent tests at the Andrew's Memorial Hospital in St Andrew and the doctors were satisfied that he could be sent home. She explained that the artiste and members of his family, including his brother, his nephew and his cousin, were on their way from a charity show in St Thomas when the vehicle in which they were travelling was involved in an accident. The vehicle, Capleton's black, GLE 400 Mercedes Benz SUV, flipped over on the top.

"The Benz is written off but the greatest thing is life. Everybody was checked at hospital and they are all doing well. No broken bones or anything like that, just a few scratches, so we are thankful that it wasn't more serious. Everything else can be replaced," Kemp said.

Sizzla, who had performed on the same show in St Thomas with Capleton, went to the hospital to check up on his colleague, a move which Kemp said "showed unity".

Kemp noted that Capleton is looking forward to performing in Kingston on Thursday.

"Capleton just returned from Guyana where he performed at the Emancipation Festival in Georgetown and that show was very good. He is ready to entertain his fans on Thursday at Acoustic Inna Di City and we are confident that it will be a great concert," Kemp said.

Presented by Thursday Night Live in association with Red Stripe, the series has already featured veterans such as Ken Boothe and Big Youth, as well as current artistes I-Waata and D'Yani. Jahvillani is on the bill with Capleton for Thursday night.