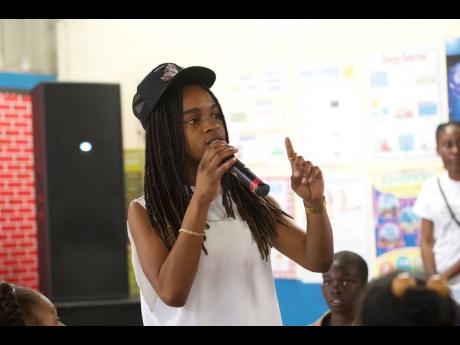 Grammy Award-winning artiste Koffee in the middle of her presentation on the first day of the ‘Haffi Make It’ School Tour. 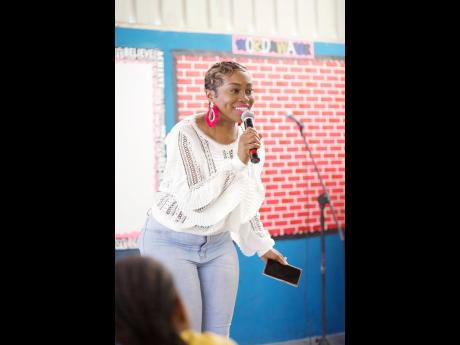 Host of the ‘Haffi Make It’ School Tour, Anna Smith. 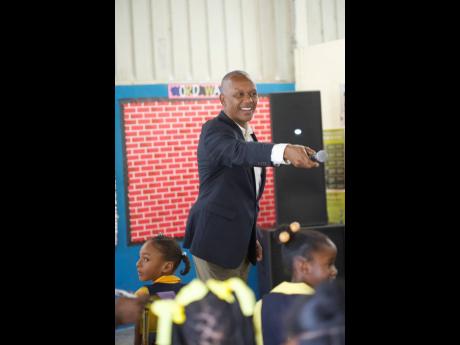 Jamaican author Alvin Day, who currently resides in the US, is all smiles as he interacts with students in a classroom on the first day of the ‘Haffi Make It’ School Tour. 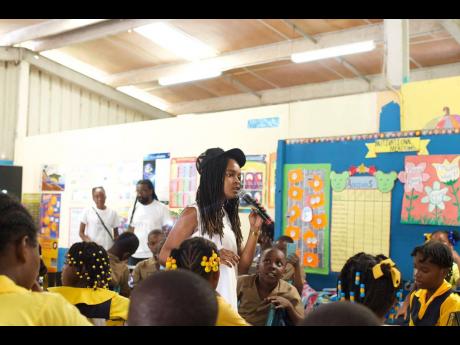 Students tuned into Koffee as she presented on ‘anti-bullying’.
1
2
3
4

Koffee is back on the rock. After an eventful trip to Europe, including performing at the Notting Hill Carnival in London, the Grammy Award-winning artiste has returned to Jamaica to reconnect with the youths through the 'Haffi Make It' School Tour.

"We're so happy to be able to do this again," Koffee exclaimed, speaking about the return of the initiative which was kick-started in 2019 but was put on pause during the pandemic when education was forced into the virtual space.

The 'Haffi Make It' cross-island tour is the joint effort of Koffee, whose given name is Mikayla Simpson, and artiste manager Tammi Chang, and initially started with secondary schools. This year, the second staging of the tour is focused on primary schools under the overarching theme of anti-bullying in all forms including cyber-bullying, managing in-person conflicts and conflict resolution, and will cover the channels by which students can report instances of bullying.

Koffee emphasised that the message to "rise up against bullying" is a significant and timely topic, and believed that she along with the team needed to capture students' attention at an early age. Positivity shines throughout her music and manifests itself in her success - becoming both the first-ever female, but youngest-ever artiste, to win the Best Reggae Album award at the 62nd Annual Grammy Awards.

The Pull Up artiste has expressed the view in numerous interviews that her passion for the youths, and delivering uplifting messages within their environment, existed prior to gaining popularity.

"It's always a joy to give back to the youth and to empower them to be the best versions of themselves," she told THE WEEKEND STAR.

Along with her team, she visited the Marlborough and Lewisburgh primary schools in St Mary on Wednesday, September 14. US-based Jamaican author of If Caterpillars Can Fly, So Can I, Alvin Day was also a guest speaker.

Chang, who is also vice president, foundation and membership chair of Rotary Club (Ocho Rios East) and CEO of LEVELS Management, said that the children could hardly contain their excitement.

"When they heard the message, they were excited; they were so responsive and adaptive to what we presented to them," she said.

Through the initiative, Koffee, Chang and the team are aiming to equip students with the tools they need to cope with and diffuse instances of bullying, so they are able to focus on unlocking their true potential, she said.

"Mr Day was phenomenal with his presentation and was able to donate a couple books to the library at each school. The participation and interaction was to the highest level. Then, Mikayla came out and she did her presentation and assure the students that bullying is not cool and highlighted the theme more than once 'to be a friend and not a bully'," Chang said.