Popeye Caution gets on ‘Love and Hip Hop: Atlanta’ 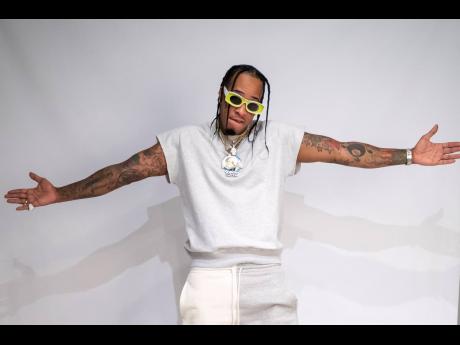 Florida-based dancehall artiste Popeye Caution is over the moon since making an appearance in Monday's episode of Love and Hip Hop: Atlanta.

He was seen vibing in studio with long-time friend, rapper and one of the show's stars, Safaree, as they recorded verses for an upcoming single. In one scene, Safaree, during a card game with other male cast members, attempts to throw a chair across the room but ends up hitting himself in the head. It happened after he was involved in a heated discussion regarding his co-parenting relationship with co-star Erica Mena. According to Popeye Caution, the antics only make the show more interesting.

"I've been friends with Safaree for probably six years or so. Safaree is a mess but he's very fun and he is a humble youth despite what the show makes him out to be," the Bezerk deejay told THE STAR. "I think him wanting to throw the chair was just him taking out him anger and it never play out for him. It was an honest mistake."

Both recording artistes have collaborated on several songs, and the most to be released is Ochi. The track, along with Ding Dong's Good Ting Dem, on which Popeye Caution is featured, was heard in an episode of The Real Housewives of Dubai and he expects it to get more airplay through the Love and Hip Hop series.

Popeye Caution has also shared an interest in the film industry and acting. He made his television debut on another reality TV series, Bad Girls Club, a few years ago, when his friend, the late Demitra 'Mimi' Roche, invited him on the set of the show while in Las Vegas.

"Reality TV is real, but with a touch of acting; it's real issues but they have someone telling you how to sit and move around but it's cool. My recent appearance has motivated me to consider acting ... I'm not limiting myself," he said. "Sky's the limit right now and I have labels reaching out to me and I can definitely see myself featured in Love and Hip Hop: Miami, who knows what is to come? I see myself acting and going anywhere music takes me."

He shared that he has watched actors like Dwayne 'The Rock' Johnson and action-thriller movie star Liam Neeson, from one of his favourite movies Taken, and wondered if he could take on acting.

"The roles I see myself in as an actor is artiste, first and foremost, star boy. I'd try a bad boy role once it doesn't involve any type of scenes with drugs, because that's not really my style and also romantic roles," he said.