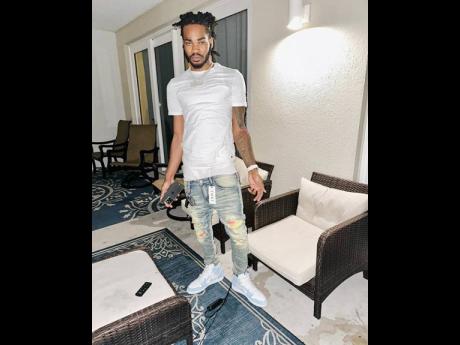 Dancehall artiste Jayblem said his recent arrest in the United States of America "is a case of being at the wrong place, at the wrong time".

The up-and-coming entertainer, who is the son of veteran artiste Danny English, is due to appear in a US court on December 5. He was charged with possession of marijuana with intent to distribute, possession of MDMA (Molly) and other paraphernalia following a recent arrest in Panama City, Florida.

According to several news reports, he was among six men detained by the US Marshals Task Force and the Bay County Sheriff Department during a search of a condominium where a wanted fugitive was said to be staying.

"This incident teach me a lot," Jayblem told THE STAR.

"All the time I was detained, me never know say people did start circulate seh me get arrested in connection with a homicide. None a we did know why we were being taken in, dem just come suh boom and handcuff we," Jayblem said.

The artiste said he was told that the charges were laid against him because he was in the same building where the contraband were allegedly found.

"So me a work with a lawyer to prepare for the upcoming court date because me just have to prove myself not guilty," Jayblem said.

The entertainer, whose given name is Jaheim Cox, said that he just wants the opportunity to clear his name. He also said that he is grateful for the support and motivation he has been receiving from a small circle of people.

Meanwhile, as he fights to get through one of his darkest hours, Jayblem yesterday released a single titled God A Lead ,which was his way of letting his fans know he was out of lock-up.

"Basically, the song ah explain the whole situation. Is just something me go inna studio and freestyle and record the video same time. When me deh inna lock-up, me never know it reach pon di media and when me finally get back me phone is when me see some things weh people a say," he said.

"This ah show me say your own people will throw you to the back of the fence and may not believe in you, like you think they do."

Jayblem emerged on the scene in 2018, but had his major breakthrough last year with his single, Account. He has since recorded several hits including Rocket, which has garnered 1.2 million views on YouTube, Martian, Twerk Fi Mi Dolly and Bad Dolly.

"Right now me just a focus and listen to daddy. Him just a tell me fi watch what me do and who deh roun' me and a motivate me. God a guide me and the truth will prevail," Jayblem said.