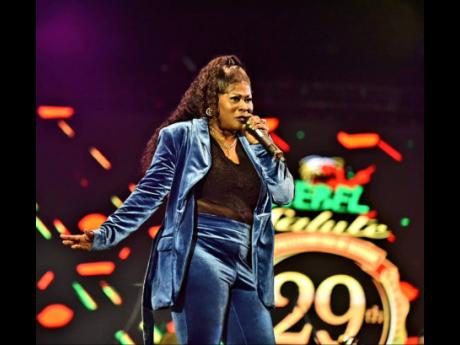 Veteran dancehall deejay Lady G says some current dancehall lyrics have left her scared to leave her house. She was speaking in an interview following her performance at the 2023 staging of Rebel Salute, now in full swing at Plantation Cove in St Ann.

"Music supposed to be fun; people supposed to laugh and enjoy themselves. Sometime when I hear some of these music, some of them gun song ya, mi feel 'fraid fi come out of my house fi real. Mi nah guh lie to you," she said as she fielded questions from Debbie Bisson and Jerry Benzwick.

She also used the opportunity to ask the younger artistes to craft lighter, more positive songs to combat what she says is a "heavy" world.

"They not gonna be like us, but I mean, create some music that can make people feel happy and 'fulljoy' themselves. The dancing song dem wonderful cause when you hear them you wah dance but we still wah hear some storyline weh a guh mek yuh feel happy and give you that vibe like it a guh last fi a while. Something like Professor Nuts and just give you a vibe. I would love for our younger artistes to come with that flavour. The world too serious ya now. Too much wickedness a gwaan pon earth ya now, people a stress out and all kind of things a happen to people right now. The amount of people wah deh pon stress medication right now, and we need the music to heal our mind, body and soul -- a dem kind of music we want. We nuh want hear no music where we 'fraid fi come out of the house," Lady G implored.

Coming from a different era in music, the deejay believes her music and that of her colleagues remain the foundation of the reggae and dancehall genre.

"The foundation always stand because without the foundation, the tree can't stand. We have to be there for them to learn if they want to learn, and they are evolving, and that is good, but the foundation have to still be there same way to keep the thing on a level playing field," she explained.

Lady G is no stranger to the Rebel Salute stage. Her last performance was in 2020, before the show's hiatus due to COVID-19. Nevertheless, she says being here tonight was an amazing moment for her.

"I am really happy, and I feel real blessed to be here. We have lost so many artistes over the two years. It was such a joy. Music mek you feel happy, joyful, playful, and is like, even if mi deh deh and mi a bawl fi mi knee when mi go pon the stage mi figet everything, no pain nuh deh deh and when mi look at mi fans and the people dem out there and the vibes that they give me they just make me feel like Lady G don't stop cause sometimes mi feel like stop."