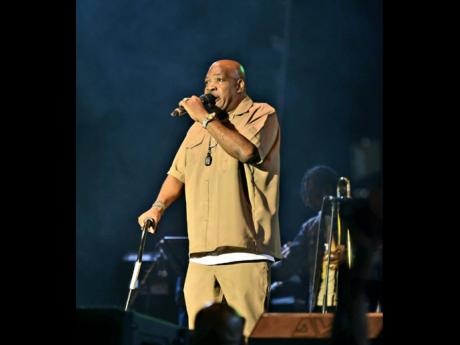 Josey Wales delved into his bag of hit tunes and provided much humour and even a stern rebuke during his set.

Riding the riddim like a lizard on a limb, Josey Wales, the Colonel and the Outlaw, had the full approval of the conscious Rebel Salute crowd as he unleashed a dancehall segment that was simply musical. He delved into his bag of hit tunes; provided humour with a song about the Bounty, Beenie and D'Angel's love triangle; and offered a stern rebuke to males who are wearing their pants below the waist.

Declaring that he is not homophobic, the Colonel certainly earned more stripes from the crowd when he used the platform to deliver lyrics such as "Put on yuh belt...We nuh waan dem dressing deh inna we yaad ... is only animal walk wid dem ... out a door".

He then had a suggestion for those men who persisted in showing off their underwear: "Look a job with Victoria's Secret," which is the globally famous underwear brand for women.

Upon entering centrestage, Josey Wales had declared that "All a di music dem good ... but we have better ones. If oonu love it seh gwaan!" the Colonel said, and the response was deafening.

Dressed in his signature khaki shirt and pants with one foot "bruk", the Outlaw introduced his set with the classic Leggo mi Hand Gateman, a hit which set the tone for his set. It was a series of "wheel and come again" as the veteran unleashed Un d ercover Lover, Prayer to Selassie, in which he begged the Emperor to send him a good girl and he outlined his preferences. He doesn't want to "end up with a ole teggereg ", or one who will give him bun and cheese, or a woman "who tek chicken pill".

He did a weed tune in which he sang gleefully about his "kutchie" which "big like a gasoline cylinder" and showed his jocular side by digging up some long buried drama with the Love Triangle.

"Leave Beenie Man and Bounty when yuh see dem war," was his advice, as he shared a fictitious song about Bounty calling him to complain about Beenie Man getting married to D'Angel. His response to Bounty actually poked fun at his own self and went something like this: "Bounty mi a bad man; mi nuh live matey life. Di way mi watch my woman mi nuh sleep at night.... mi walk round mi house wid a big flash light ..."

The Colonel gave a shoutout to veteran singer, Freddie McGregor, who is recovering from a stroke.