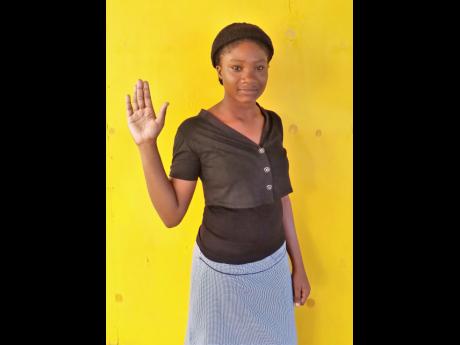 The Living Water Apostolic Church of God in Four Paths, Clarendon, is blessed with a lot of young people. Simone Donaldson is one such, and she has testified about the goodness of Jesus.

Donaldson, in her testimony, stated that she was baptised in 2008, but that she slipped up and recommitted her life to God earlier this year. The young Christian noted that she has been active at her church, taking part in the reading of scriptures in services, among other things, and she loves what she does for the Lord.

She added that she has had life a bit difficult over the years, but that God has helped her to make it easier.

"I used to live in Manchester for a while, and while being there, I was preparing for my CSEC (Caribbean Secondary Education Certificate) examinations, when my eyes started giving me trouble. I had a Spanish examination to sit and was there preparing, when I felt my eyes started burning. It so happened that when I went to do the examination I had to hold my right eye to do it," said Donaldson.

She noted that when she got her Spanish examination result, along with result for a few other subjects, she learnt that she was not successful in quite a few. This, she said, forced her to do three resits, including mathematics. When the results came following her resit of the examinations, Donaldson said she was successful in two of the three subjects, but she failed mathematics.

The persevering Donaldson said she did over mathematics in the 2017 sitting and was successful. For that, she said, God was responsible. She said God has been good to her and she is indebted to Him for all His benefits towards her.

"I was not financially stable, and I went to church one day and was asked to do a church sister's hair for her to attend a church function. That was done, and when I was through I ended up staying at her home, after going through a lot in Manchester. I was being pressured with a lot of work, including house chores, and those affected my performance in schoolwork," said Donaldson.

The Christian pointed out that she was not being treated well by those with whom she lived in Manchester, and so she did not want to remain there. She added that the day she went to do her church sister's hair she felt comfortable staying with her, and decided to stay with her ever since.

She said due to what has been happening in her life she has been encouraged to hold on to God. She testified that she is not only holding to God because of His blessings, but because she really loves God.

"God loves me even before I started to love myself. I did not even know that He was thinking about me, when I was not thinking about Him. He is still turning things around for me," noted Donaldson.