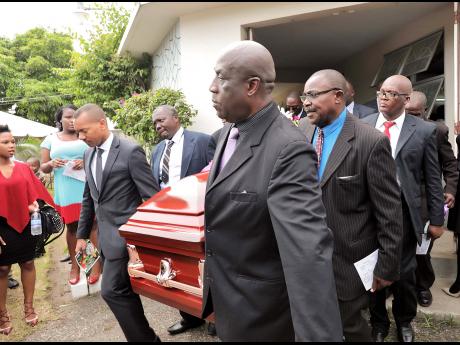 From an early age, Lucille Mae Wilks was an involved individual. This was spelt out at a recently held thanksgiving service for her at the Denbigh United Church in Clarendon.

"During her early years, Lucille engaged in the childhood activities that characterised children born in our era growing up in rural Jamaica. She fetched water from standpipe, tidy house and sweep yard, go to river to wash, bathe, skip, swing, play ball,

She shared that the well-loved and respected Wilks was a stickler for decency and respect and she would normally be heard reminding others that they should "have manners".

Porter noted that Wilks was a regular at church and school, and those added another dimension to her early growth and development.

She said after Wilks completed her secondary education at Clarendon College, it was clear that she would have ended up in the teaching profession. And that she did when she trained at the St Joseph's Teachers' College.

"Lucille remained in teaching, and what an excellent teacher of English language, English literature, and communication studies she was! Her students in the various schools she taught unreservedly spoke of her as their best in those subject areas," she said. "Yallahs Junior Secondary, Clarendon College and Denbigh High were indeed privileged to have her serving on staff. She saw it as her moral obligation not to shortchange her students, but do everything in her power to help them master the subjects she taught, and so her dedication and commitment to them was second to none," said Porter.

Wilks was also a vice-principal at Denbigh, where she worked for 17 years.

"She honed her administrative, skills providing sound leadership, which contributed in a significant way to Denbigh and helped it to become a school of choice in Clarendon," said Porter.

Wilks was equally good at instruction at the tertiary level. Students at the Catholic College of Mandeville and the University College of the Caribbean benefited from her knowledge in her subject areas.

Wilks was also described as a strong, independent woman. She was said to have a strength that permeated character, personality and presence. Her influence transcended the classroom as well.

"Lucille was a good wife, mother and homemaker. Family needs were always a priority for her, and she played a pivotal role in every aspect of her family's life. I'm sure that Tony (her husband), after 37 years of marriage, has no regrets that he took the first step to have the first dance of the evening, with the tall, slim chick that caught his eyes at the party at our place in Johnnies Hill," said Porter.

Wilks, who was born on

May 4, 1955, passed away on September 18. She leaves behind husband Tony, daughter Evette, grandchildren Imani and Mia, sister Barbara, stepson Clayton, aunt Gloria, and other relatives, as well as her church and school families.

Her body was interred at Dovecot Memorial Park following the service.