God continues to deliver her needs 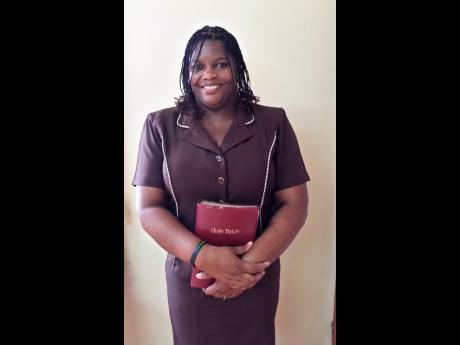 Paulette McPherson is one believer who testifies that God has come through for her in her times of need and distress.

She testified that she has been walking with God for over 37 years, and has served God in a number of positions, including as district youth director for the Spaldings District of New Testament churches

McPherson said God not only saved her soul, but helped her out of many stressful situations.

"Coming from humble beginnings, and to see where God has brought me from and where he has taken me now is such a blessing. I am now the owner of my own house, and I am about to own my own car," said McPherson.

She shared that at one stage she was suffering from poor blood circulation, and added that her blood was also not clotting properly.

TOTAL HEALING FROM THE LORD

"I remember visiting the doctor and there was a plan afoot to have a blood transfusion done for me, and when I went back all was normal. So I knew that was total healing from the Lord," said the churchwoman.

She said God moved her blessings to another level when her daughter had a problem with a part of her vertebrae when she was 11. She was down to do a procedure.

"We did not have the money to do the procedure. We had to go to Kingston to have it done. The cost was over a million dollars and we did not have a cent," shared McPherson.

But once again God came through for the mother. She told the doctor that she was going home to pray for her daughter to either get healing or help from the doctor.

"The doctor told us that my daughter would have to do surgery because there was a bone that was twisted in her vertebrae. I told the doctor that he should do an X-ray to determine if healing had taken place, because I had no money," said McPherson.

The doctor called one of his colleagues and made an arrangement. The operation required 18 screws and two rods.

"She was taken to a private hospital and everything was paid for. When I asked the doctor how much money I owed him following the procedure ... he told me just to take my time, 'just submit your health card, and when you have the money you can take it in by instalments'. At that time we felt like giving up, but the Lord came through for us," she said.