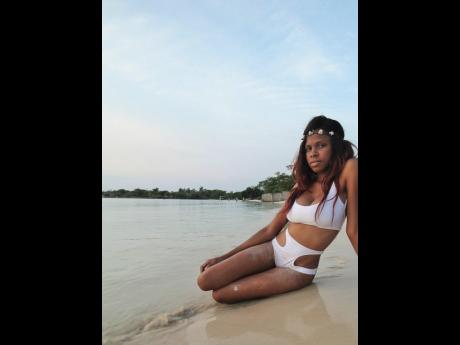 Contributed Fashion designer Delese Martin wearing one of her own designs.

When Delesa Martin was in her early teens, she received informal sewing lessons from an elderly lady in her community of Milk River, Clarendon. She, however, had no idea that would be the start of her career as a fashion designer.

Today, the 22-year-old is the owner of the clothing line 'FreeeDM' or 'Freee by Delesa Martin'.

"I choose that name based on the feeling I want people to get when they wear my designs. I want them to be relaxed, comfortable and confident in whatever they wear, hence 'Freee'. That's how I always feel, without worrying about what people think or say," Martin noted.

Apart from the amateur lessons she got from the elderly woman, Martin received no formal training for fashion designing. however, she had a natural aptitude for it.

"I found that I had a knack for taking pieces of clothes apart and fitting different pieces together. When I was in high school I started sewing bikinis for myself as well as other items of clothing, then friends started asking me to make theirs as well. Also, I got a lot of enquiries when I posted my designs online," Martin said.

Martin pursued a Journalism degree at the University of The West Indies, which she believes has played a tremendous role in developing her marketing and communications skills to promote her brand.

Earlier this year, Martin was invited to participate in Saint International's Clarendon Fashion Escape, which was her first major fashion event.

"The organisers and other designers were very impressed with my work. Deiwght Peters, CEO of Saint international said my designs were great, and he was cheering for me. It was amazing!" Martin recalled.

Martin is slated to appear on a number of major fashion shows next year, including Fashion Block and Style Week.

Being a young fashion designer in Jamaica has inherent challenges. However, Martin is not deterred.

"One of my biggest problem coming into this industry was having the funds to start the business and finding the types of fabric, I want to make my work different from other designers. I found that Jamaica is somewhat limited in that area. however I am highly motivated to continue and strive to build my brand," Martin said.

Her advice for upcoming designers is "Don't ever give up; if you love it, there is always a way to make it work. Don't be intimidated or discouraged by others. It will be hard and stressful at times but the rewards will be worth it."