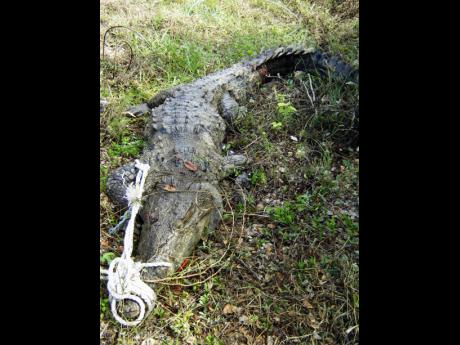 A large crocodile that was captured in Grants Pen, St Thomas, yesterday has been released back into a natural habitat by the National Environment and Planning Agency (NEPA).

Ricardo Miller, an environmental coordinator with NEPA, estimated the creature to be about 20 feet long, weighing about 450 pounds.

"We returned it to a very far wetland, far away from any human settlement, but we will not disclose the location because people are known to hunt these animals for their meat and other reasons," Miller said.

Yesterday, a group of residents and police in Grants Pen captured the animal in a canal.

Residents have expressed discomfort with the presence of numerous crocodiles they claim are attacking their domestic animals and threatening their lives.

They called for NEPA to take action, but Miller said the agency does not intend to remove the reptiles from the nearby wetland.

"The wetland is the crocodiles' natural habitat. They do not usually venture out into the community to attack people, but what has happened is that due to the heavy rains, the canal gets flooded into the wetland, and the crocodiles venture up the canals to explore," Miller explained.

He said residents should avoid the wetland and if crocodiles are spotted outside their natural habitat, they should call NEPA, instead of attempting to capture the creature.

He said NEPA plans to place warning signs in areas that are crocodile hotspots.