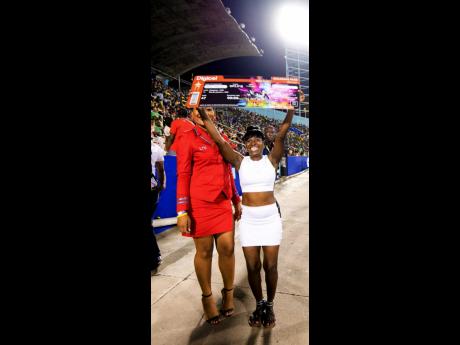 Contributed Kenolee Hamilton celebrates after being announced the winner of an all-expense paid trip for two to Brazil after playing the Digicel Social Media Trials game.

For Kenolee Hamilton (@kenobless), a 34-year-old farmer from Nine Turns district in Clarendon, becoming a Digicel social media fan was one of the most rewarding decisions she has ever made online.

Hamilton scored an all-expense paid trip for two to Brazil to see the Jamaican team perform at the Olympics after completing daily challenges in Digicel's Sprint to Brazil Social Media Trials, which were hosted on Digicel's social media pages.

"It's always been my dream to go to one of the Olympics," an excited Hamilton shared. "Athletics has always been one of my favourite sports, and every time the Olympics come around, I watch every race and cheer for my country. So, I can't wait to be in that stadium this August cheering on the Jamaican team live and in living colour!"

Hamilton, who will be taking her sister, Terry-Ann, with her to Brazil, also won DL1000 smartphones and service, tours and exclusive access to signed memorabilia from Team Jamaica.