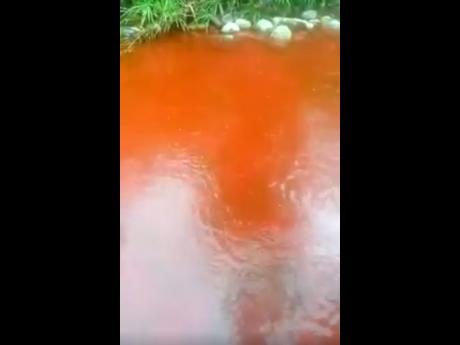 Residents of Freeman's Hall in southern Trelawny got the scare of their lives this week when their usually clear flowing Quashie River turned red.

Hugh Dixon, an environmentalist who resides in Albert Town, said persons speculated wildly about the cause of the river turning red.

"Some residents are now of the belief that the red water was caused from a bleeding mermaid further up the stream. I can imagine how timid these people will be when next they go back to the river," he said.

Annie Brown, a teacher at Freeman's Hall Primary, told THE WEEKEND STAR that a woman who was washing by the riverside was so scared when she saw the blood-red water, she ran away leaving her clothes behind.

"We closed school early because nobody knew what was happening. There was no announcement. It is a total disrespect by the National Water Commission. The woman who ran leaving her clothes could be an heart patient. The sight could cause a heart attack," Brown said.

The Water Resources Authority (WRA) yesterday said persons should not be alarmed.

According to a media release issued by the authority, dye tracing exercises are currently being conducted in the Rio Bueno Watershed.

"The dyes were injected in the Quashie River near Freemans Hall and in Lowe River near Wait-a-Bit, Trelawny on Wednesday June 14, 2017," the WRA said in the media release.

The authority said the use of the dye is necessary in order to trace the flow path of a river which sinks and re-emerges.

Roshelle Archer-James, a technical officer at the WRA, said that the test is being done in order to determine which tributaries flow into the Rio Bueno.

She said this information is critical in the management of the water resources and admitted that the authority erred in not advising residents.