Have you seen Jullian Jackson? 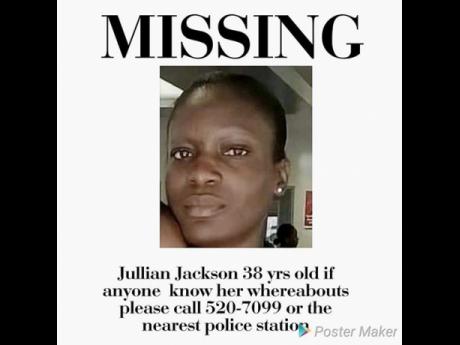 For the past two weeks, Riquel Riddle said she and her family have been resting uneasy following the disappearance of her sister, Jullian Jackson. The 38-year-old vendor was seen at her home in Fort William, Westmoreland, on May 20.

"She was wearing a black skirt suit. After she left home she went to Black River in St Elizabeth. We went to the Black River market to check and someone told us they saw her a week after she went missing in Kingston," she said.

Riddle said she went to report the matter to a police station in Kingston and they searched the area without success.

A distressed sounding Riddle said she is pleading with anyone who may have any information on her sister's disappearance to contact the nearest police station. She told THE STAR that this is unlike her sister to just abandon her family, especially her only child.

"My sister is not this type of person. She will never leave her family like that. If she is going somewhere, she would have at least called her daughter. Her phone was ringing up to a point but now it stop. We don't know what happened, but we just want her to return home," she said.

Anyone knowing the whereabouts of Jullian Jackson is being asked to contact the Westmoreland police or the nearest police station.