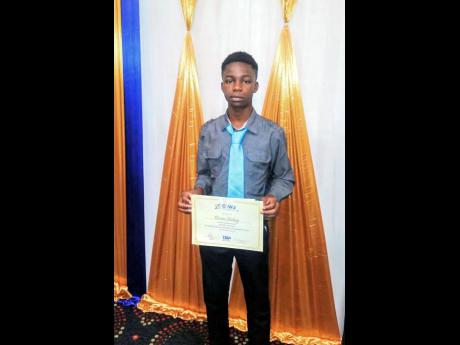 Twelve-year-old Devon Hickey is one step closer to becoming a neurosurgeon. In addition to scoring a 95 per cent average in the Grade Six Achievement Test (GSAT), he copped a Grade One in biology in the recent CSEC exams.

His mother, Sherefa Hickey told THE STAR that she is quite amazed by her son's latest achievement, stating that he has a photographic memory.

A science teacher at McKenzie Evening Institute, Hickey said her son sometimes sticks around in the classroom for a few minutes, and would often give the correct answers whenever she asked a question about the subject.

"He would be playing outside and run in for a few minutes and shock the class when I ask a question and just run out back. One day we were looking at the heart and the kids could not explain the concept of how blood travels and he explained it for the class. We were all shocked, and I kept wondering how he knew all that stuff," she said.

When Devon asked his mother to let him take biology, she was a bit hesitant as she believed he was too young and not prepared enough.

"He went and he complained to family members that I didn't want him to do it. He told me it was easy and I told him it's not and he just probably learnt about some of these stuff from YouTube. It's not like he even paid much attention in class because he was always running up and down," she said between laughter.

As young Devon prepared for his GSAT exams, he did the same for biology.

"He doesn't like English and communication tasks that much so he would spend a lot of time reading his biology book. There were times that I had to take away the book from him so he could focus on his other subjects as well. He enjoyed the subject and I didn't have much impact in his life as it relates to teaching him the subject," she said.

She stated that her son was inspired after his father, Devon Hickey Sr, was left paralysed from the chest down after a motor vehicle accident in Westmoreland last December.

The youngster, who earlier this year graduated from Unity Primary School in Westmoreland, said he wanted to make a change after realising how difficult it was to get some medical resources in Jamaica.

The elder Hickey had to be flown overseas for medical assistance. Although the policeman underwent six life-saving operation, he is still paralysed.

During his preparation for both exams, Devon's mother was overseas with his father as he received medical treatment.

"He has a very close relationship with his father and he wanted to become a doctor even more from the accident occurred. He is at the point where he is telling me that he doesn't want to go to school and that I should tutor him until he gets enough academically to go to medical school. A lot of kids would get withdrawn after the accident, but I believe this is what drives him," she said.

She added that because his father has spinal cord injuries, he is adamant on becoming a neurosurgeon.

"I am really proud of him. I was pushing him more to pay more attention to English Language because he didn't like the subject. He practically learnt biology on his own," she said.

Hickey is now looking forward towards starting his secondary level education at the Manning's School in Westmoreland.