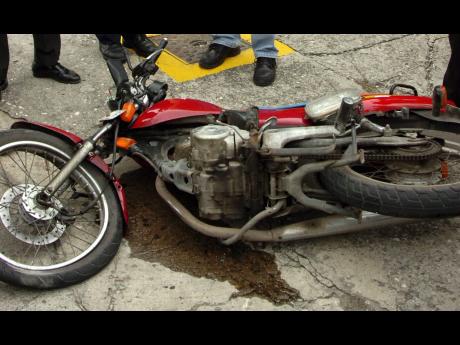 Two persons succumbed to injuries they received in a vehicular collision along Bowens Road in Sheffield, Westmoreland, on Sunday.

They are Demone Brown, 29, of a Hanover address, and 16-year-old Roysha Buchanan of Kingsvale, also in Hanover.

Reports from the Negril police are that at about 8 p.m., Brown was driving a Wassi motorcycle, with Buchanan as a pillion, from Savanna-la-Mar to Negril.

On reaching a section of the roadway, he allegedly tried to overtake a Nissan Versa motor car, with which he collided after crashing into a Toyota Coaster bus travelling in the opposite direction.

After the collision, the motorcycle burst into flames. Brown and Buchanan were taken to hospital where they died while being treated.

The fire department and the police were summoned. Cooling-down operations were conducted, and the scene was processed.