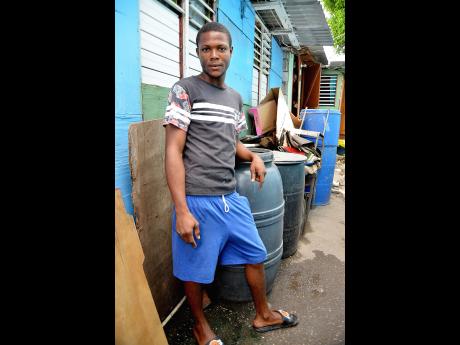 Howard 'Stinga T' Stamp is trying to make it as a musician in the inner-cities of Kingston.

Mark Lane is a haven for up-and-coming entertainers who are just waiting on their musical breakthrough.

Among them is Howard 'Stinga T' Stamp, who is adamant that had he got better support from his family and friends, he would have be an established entertainer.

"Mi na tell no lie, me no think me get the push and support from my family and friends dem. Yes, dem will all say me talented, but none a dem wouldn't even try take on the road with me sometimes and make we do some promotion. Them will sing me song dem, but dem no promote me, so me just a gwan easy and do it alone," he said.

He, however, emphasised that he is known by everyone in his community for his vocal talents. He currently lives in a tenement yard, but the singjay is confident that his latest single, Pound Pile, will provide him with better living conditions.

"Mi a big artiste, enuh, but right ya now, a likkle mackerel and rice me just dun eat and a gwaan wash up the plate. Me na watch no face, because very soon a steak me ting a go deh, and me only a go eat mackerel because me choose to," he said as he washed the dishes at an outside pipe.

He said Pound Pile is about working consistently and investing wisely. The 21-year-old said he had no intention of becoming an entertainer until he was asked to singjay a line in a song that was being recorded by another budding artiste.

"Me never just get up and say me a go do music enuh. Me have a friend name Double Trouble, and one day him a do a song and say mi fi just add in a part and me do dat and everybody a say me sound wicked. The entire community know say me a entertainer, but a just streets fi know it now," Stinga T said.

Stinga T told THE STAR that he draws inspiration from daily happenings in his community and is also promoting other singles such as Africa and It Nuh Deh Deh.