Biblical Streets: John would be proud of us - residents 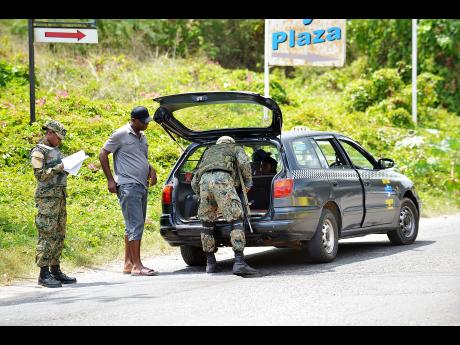 Members of the Jamaica Defence Force search a vehicle along St Johns Road, St Catherine, in March during the state of public emergency in the St Catherine North Police Division.

John was the son of Zebedee a Galilean fisherman and Salome. John and his brother, St James, were among the first disciples called by Jesus. In The Gospel According to Mark, he is always mentioned after James and was no doubt the younger brother. His mother was among those women who ministered to the circle of disciples. Like the other disciples, John preached and encouraged love and unity.

St Johns Road in Spanish Town is named after the disciple, but is often stigmatised as one of the toughest communities in St Catherine. The area once had a spiralling crime rate, but, according to some of the residents, John would be extremely proud of their present behaviour.

"One time politics war used to mash up the place, but not anymore. The two party dem used to war and man used to drop every week, but that change now. John a look down and just a smile with the people dem round here cause dem find dem senses," an elderly man said.

According to another resident, there was a time when thugs from the area would spare no one during their killing sprees. However, he said that negativity has been replaced by a string of ambitious youngsters.

"No man nuh have no time for that again, enuh. The man dem put down dem gun for girls and work. Jesus and the rest a him quenga dem was gyalis, so me sure say dem happy say the man dem a walk inna dem footsteps now," he said.