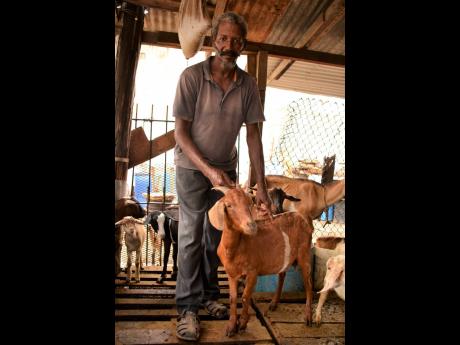 Rowe with One, the goat he gave CPR last week after the animal was nearly accidentally strangled to death. 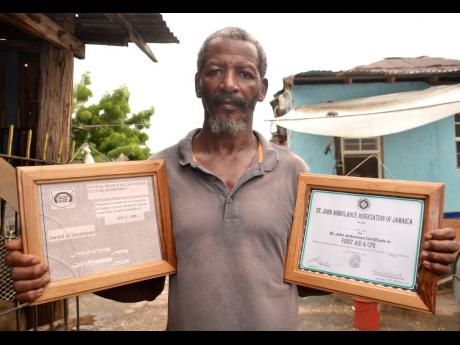 Alva Rowe shows his awards for cattle husbandry (left) and for first aid and CPR. 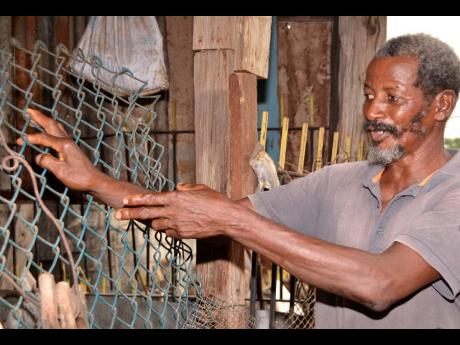 "Mr Rowe you turn doctor man," an onlooker said laughing as he bumped fists with Alva Rowe, who stood outside his Slipe Pen Road residence.

The farmer has been the talk of social media after a video of him giving CPR to one of his goats went viral last Thursday.

But although this may seem 'strange' for many, breathing back life into his animals is nothing new.

"This is about the third goat I have given CPR, so this no new ting for me. I remember one of my goats was in labour and the kid just wouldn't born. So I had to insert my hand and deliver the kid. What I did last Thursday was nothing out of the ordinary for me," he said.

Rowe has been a farmer for the past three decades and currently owns 70 goats, several 'common fowls' and pigs.

He stated that last Thursday's incident occurred while he was taking the herd to feed at Heroes Circle.

Believe it or not, Rowe has named all of his goats, and they knowingly respond to their titles. The 'animal of the moment' is a she goat called 'One'.

"You know there are some unruly ones so I put one of the unruly ones with Leo and One, and they started running off and the rope pull on One neck and began choking her. When I pull the rest from One, I realised she was close to death. The rest of goats saw the danger and I told them to wait on me so they wait while I bring back One to life," he said.

Rowe said he has no formal training in CPR or first aid, but credits his knowledge to watching medical documentaries and reading material.

A well-known figure in his community, he has received an award of excellence from Central Branch All-Age School for cattle husbandry and another from St John Ambulance Association of Jamaica for first aid and CPR.

"I had a goat whose belly was ripped out and she was pregnant. I removed the kid and sew up the mother and get her back to perfection. When you have animals, you have to treat them like family and I do my best to ensure that they are okay, although I grow them for 'eating'," he said.

Rowe's goats are not only obedient, but also very inquisitive.They all stared curiously at the news team as their master was being interviewed, only breaking focus when a group of children played loudly with each other outside the gate.

According to Rowe, he teaches his animals to be respectful and will often discipline them whenever they get unruly.

"Is just yesterday (Thursday) the one name Trouble decides to cross the road without my permission. So I gave him a spanking and let him know that he shouldn't do it again. If you deal with your animals like they are your children, they will obey you because they are very sensible," he said.

"There are days when sometimes I will hear the teachers raising up the children and ask them why they can't be obedient like the goats who listen to me. They even line up at the pedestrian to cross," he laughed.