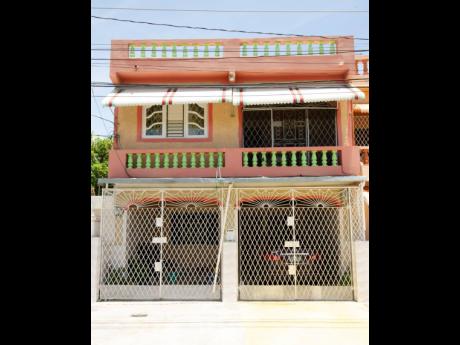 Photo shows the home of the Manning family in Cumberland, Portmore.

The community is mourning the murder of one of their own - 65-year-old pensioner Pamela Manning.

The retired teacher was fatally stabbed by her husband Paddon Manning during last dispute on Saturday night.

The couple's neighbour Pauline Brown was teary-eyed when she spoke to the news team yesterday.

Staring at their veranda, she stated that she is having a very difficult time coming to terms with the crime that has rocked the entire community.

"A likkle while mi go hold the grille a call Pam, enuh. A Friday morning mi see her a go road and mi tell her to carry back something for me. Pam was a quiet, nice lady. I have never heard them argue at all ... if they ever argue, it must be inside because they are the type who will never wash their dirty linen in public," she said.

According to a release from the police's Corporate Communications Unit, about 10 p.m., the couple was involved in a domestic dispute that turned physical.

Mrs Manning was stabbed in the neck during the altercation. She was taken to the hospital where she was pronounced dead. Her husband was subsequently arrested.

Brown said she was not at home when the incident occurred but said that no one reportedly heard or saw anything strange coming from the Mannings' two-storey home last Saturday night.

"Saturday they both went to Clarendon to 'tomb' his father's grave. I heard that after the incident he came and a shake down mi and another neigbour's grille, but none of us were at home. I don't think anyone around here cook any Sunday dinner. Mi soon go put up my black cloth because all now mi can't believe," Brown said.

According to Brown, although she condemned the act that was committed by the former senior policeman, her heart also goes out to the 62 year old.

"Despite everything that happen, I feel really sorry for him because none of us know him to be that type of person. No one expected this from him and we and him live around here for more than 30 years," she said.

Similar sentiments were echoed by another neighbour who stated that they would be visiting the embattled Manning soon.

"A small group of us are planning to pay him a visit behind bars. This is really a sad time for the community because they were a couple that everyone held with high esteem. We never saw the slightest inclination that something like this would happen," he said. "A lot of the persons who live around here are retired professionals so we wouldn't see them much unless there was some form of social gathering. We usually have a few functions and they would be involved in them too."