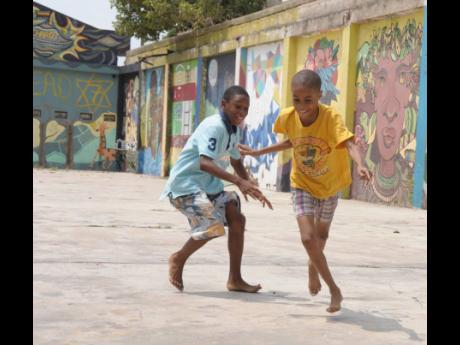 In this 2016 photo, Shaquannie Leeshue (left) and Jaheim Vassell play along Fleet Sreet. 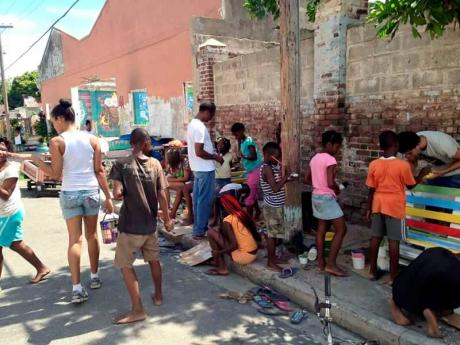 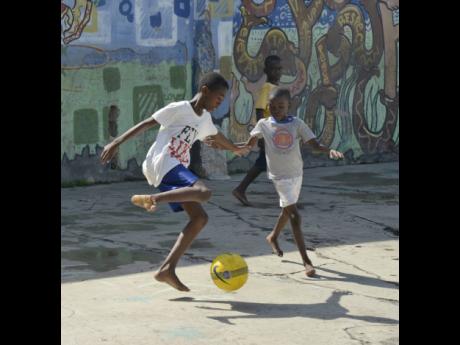 Life of Fleet Street is often joyful. Here there boys put their football skills on show.
1
2
3

The directors of Life Yard will be putting the thoughts and compositions of 30 children of Fleet Street in downtown Kingston in a book which they hope will inspire readers.

Danijah Taylor, one of Life Yard's members, said the book will be titled, and is to be released later this year.

"We are going to curate all these stories into a book ... something that is similar to Daily Bread, where the readers can get inspiration from them each day. This book will be basically sold to adults and persons overseas. While some of them are fictions, a lot of these children write about their experiences in the community. One of the stories that one of the children wrote is titled My f ather's f reedom and another is called The rastamen of Life Yard, he said.

Fleet Street is located in a section of central Kingston called Parade Gardens. The area was once one of Kingston's most volatile inner-city communities. However, the rastamen of Life Yard have led the way in resuscitating the community. It now boasts eye-catching murals and children are exposed to programmes, one of them being the Writing for Life workshop.

"I have come to realise that illiteracy is a big problem among our youths in Jamaica. When I first went to Life Yard in 2017, I realise it was like any other inner-city community, where some of the kids had a deficiency in literacy, so that's how we develop Writing for Life, to let their appetite for reading and writing grow, and so far it is working," he said.

Taylor said that the Writing for Life workshops helped children in creating the pieces that will be included in the book.

"We collected 36 stories from 30 students, inclusive of 21 boys and nine girls. We give them a template and they then pick four words out of an idea box and whatever words they pick, they used them whenever they are writing their pieces. We also give them display books and with the help of an illustrator, these children are also able to tell their story of pictures," Taylor said.

Having done much of the heavy lifting with their limited resources, Life Yard is now turning to the public for help to make sure that Writing for Live - Pen Power become a reality soon.

Taylor said they are seeking funding to purchase much needed equipment to publish the book later this year.

"We plan to do everything ourselves, including publishing, so we are really seeking your help. These children will benefit from this publication in terms of getting royalties and so on. The thing about writing is that one may not benefit immediately, but believe it or not, one of these children's story could be turned into a movie years later," he said.