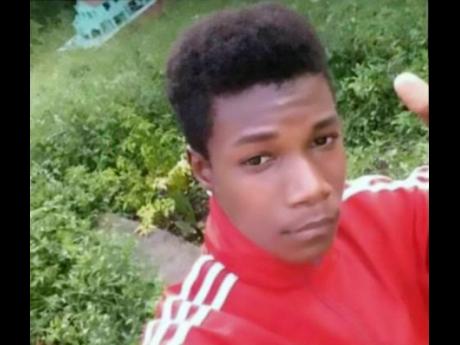 These were reportedly the spine chilling last words of 18-year-old Thompson Town High School student Demoy Watson, who died minutes after he was hit with a stone during a dispute on October 17 at his home in Iron Gate, Clarendon.

His parents Michael Watson and Ivy Morrison say that they have been unable to sleep after watching their son take his final breath.

"Mi inna shock from the incident. It really mash mi down and all mi madda pressure raise really high, it rough on us. Mi can't even eat or sleep since mi likkle bwoy dead," said Watson.

The May Pen police have charged 34-year-old Heron McFarlane, a farmer who also hails from Iron Gate, with murder. Demoy's parents said that McFarlane is well known by the family.

It is reported that on the night of the incident, Demoy and McFarlane had a dispute. The teen reportedly used a machete to inflict wounds to McFarlane.

It is alleged that McFarlane subsequently used a stone to hit Watson in the head. The police were summoned and the teenager was taken to hospital where he was pronounced dead.

According to Watson, he and his wife were in bed when they heard Demoy enter the house. They then heard a bang on their grille.

Upon investigation, McFarlane was outside and accused Demoy of assaulting him and cutting another man.

"Next ting mi know is mi hear 'buff' and mi see like mi likkle bwoy go dung and a hold him belly and him never stop till him reach on the veranda," he said. "After him tell mi and him madda say him a go dead, him take time and pass and go in the house and little after mi hear like something heavy drop round a mi son room. When mi go round there, mi see, little bwoy lay down stiff on the ground and no matter what we do, we couldn't revive him."

Morrison said that her son loved life and vowed that when he finished school, he would assist them financially.

"Several days before him dead, him follow some people go pick ackee a bush and beg mi follow him go May Pen to buy a school shoes. Dat day, we meet up on some soldiers and him tell one a dem say him a go come join the army too and the soldier encourage him and tell him what him need to do, but mi son never get to realise his dream at all," she said.