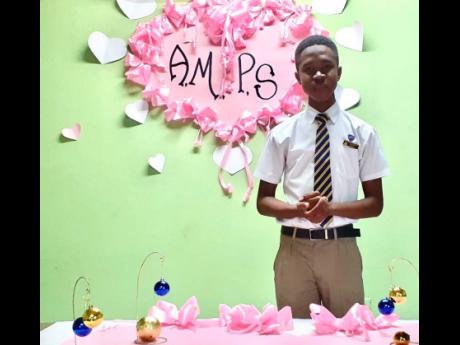 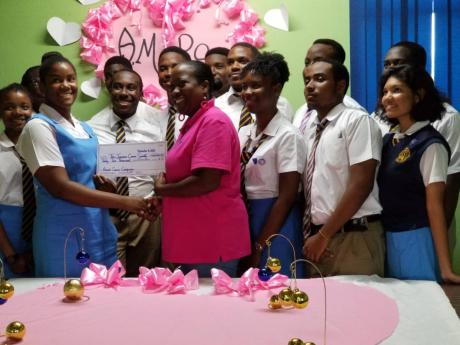 W hile some school clubs and societies are focused on doing work within their school environments, the Aspiring Medical Professionals Society of Ardenne High School has raised and donated $42,000 to the Jamaica Cancer Society.

The cheque handover took place last Friday morning at the school. Kyle Wright, co-president of the club, told THE STAR that they raised the money in just five days.

"It's a club not only for persons wanting to enter the medical field but also for anyone who has an interest in medicine and health. We raised the money by asking for donations from the students and giving pink ribbons for every donation, no matter how small. We also had a bake sale. We did this all in the span of five days as we had a late start because of the time taken to get permission," he said.

The sixth form student said they didn't have to think too hard about donating the money to the Jamaica Cancer Society.

"We appreciate the work they are doing to make a difference in the lives of persons affected by not only breast cancer but all types of cancer. We felt it our responsibility to aid them in any way possible," he said.

Wright came up with the idea during the summer.

"We wanted to not only have our regular meetings, but to grow and influence our community in a positive way, and so we decided to carry out this campaign. We also put up flyers around the school to inform and spread awareness," he said.

The club is planning another campaign for this year.

"We are not sure when yet and for which occasion, but we definitely will be doing it again. The support the students show is amazing and we know they will be behind us all the way," he said.

Though the club members did most of the heavy lifting, Wright says many other people, including the principal Nadine Molloy and other members of staff for playing instrumental roles in ensuring that the campaign was a success.

Wright also thanked his mother, who donated props and gizzadas in aid of the club's bake sale.