Let them learn a skill - ... Shelly-Ann Fraser-Pryce says everyone won’t be lawyers and doctors 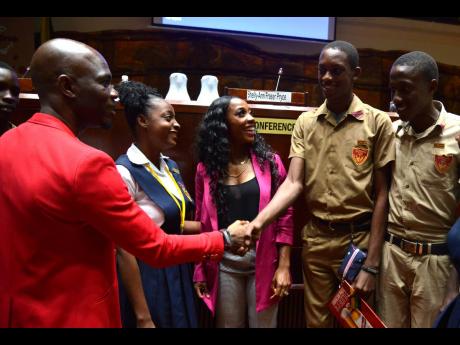 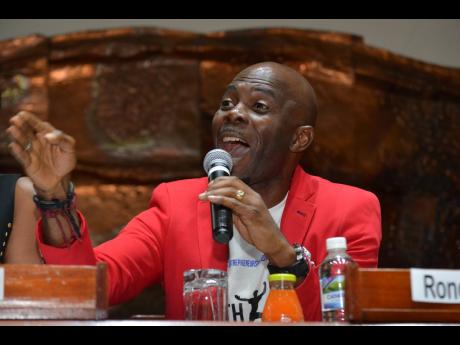 Rondel Positive speaking at the youth forum held at the Conference Centre on Wednesday.
1
2

‘ M ommy Rocket’ Shelly-Ann Fraser-Pryce has challenged parents to understand that not all students will excel in school, and assured them that it’s understandable.

Fraser-Pryce was speaking at the Youth Leadership Entrepreneurship Advancement Programme (YLEAP) put on by Rondell Positive Music (RPM). Over 250 primary and secondary education students were present.

The programme is designed to develop students who are in need of further reinforcement and guidance through a cascade of support and on-going mentorship. YLEAP forms part of the umbrella of activities executed under the Open to Purpose (OTP) Devotional School Tour launched in September.

The four-time 100m World champion told THE STAR that some students can find their passion outside of the classroom and still contribute positively to the nation.

“I have met parents who believe that a child is not interested in school and a lot of them resort to corporal punishment or abuse to get the child to learn. I believe that there are a lot of them (students) who are creatives … they can learn a skill. We are moving away from the years where everybody believes ‘I’m a doctor, I’m a lawyer. There are so many businesses that can be created just from one person. Not everybody is going to be book smart. I would love if parents would explore with their children, instead of beating and thinking that it is the end,” she said.

The sprinter admitted that being part of the conference was absolutely necessary, as leading the youth is a must. “It’s very important given the platform that I have. I always believe it’s important to share my journey to the students because I believe we are the same and we are coming from similar circumstances.”

Fraser-Pryce took the students on an inspirational journey, demonstrating how they too could maximize their potential and turn their dreams into reality.

She continued: “Some of them are trying to overcome different things in their lives, so I’m just a representation for them to know that when they see me, they see hope, vision and evolving from who they are and becoming so much more.”

Gospel artiste Rondell Positive told THE STAR that he believes all students who were in attendance left the event uplifted and motivated.

“We believe we have impacted the lives of close to 400 students who attended today and impact them permanently. I believe it is very important for us, and one thing I’m conscious that they have left with, is that they were born to fulfil a purpose. There’s a footprint that only that particular person can leave in the Earth,” he said.

“Because they are Jamaicans, the world awaits them, so that Jamaica may under God, increase in beauty, fellowship and prosperity and play her part in advancing not Jamaica, but the welfare of every human being. I’m convinced that if not all of them, most of them left here knowing that there’s something they are supposed to do.”