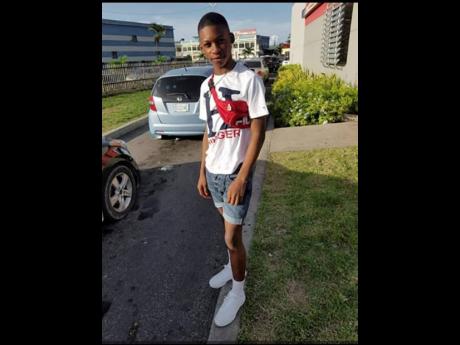 Contributed This teenager has been missing since last Friday.

The 14-year-old, an eighth-grade student at Enid Bennett High School in Bog Walk, has been missing since Friday, November 15.

A distraught Graham told THE WEEKEND STAR that this is the first time her son has been away from home for so long. She is also pleading with the public to join her in the search for the youngster.

"He usually spends the weekends with me and the week with his dad. He didn't go to school Friday, so he came in the morning. He had something to eat and then I told him I was going to purchase some stuff for the bar. When I came back, I was told that he said he was going back to his father's place," she said.

Graham said she was baffled when she received a call from Woodrow's father asking to speak to him.

"He clearly didn't return to his father. When I called his cell phone it went unanswered. Someone told me that they saw him in Linstead on Friday night. This is the first time something like this has ever happened and it is rough. I have a constant headache and I have not been eating or sleeping," she said.

Woodrow is of dark complexion and slim build.

"I just want my son to return home. We love him and if he don't know anything else, he knows that. We are not sure what happened, because he is usually a well-behaved child. Please come home, Romaury," she pleaded.

Anyone who may know the whereabouts of Romaury Woodrow is being asked to contact the Linstead Police Station at 876-985-2285 or 119.