11-y-o recovers from dengue - Parents, grand-aunt cried as they feared the worst 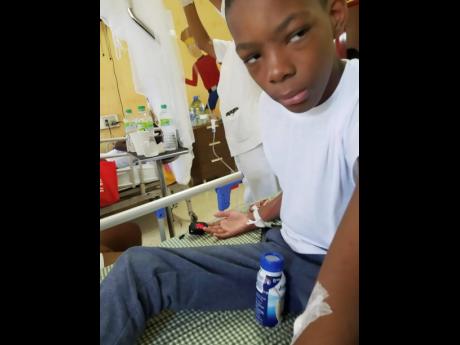 Lushane Campbell at the May Pen Hospital. 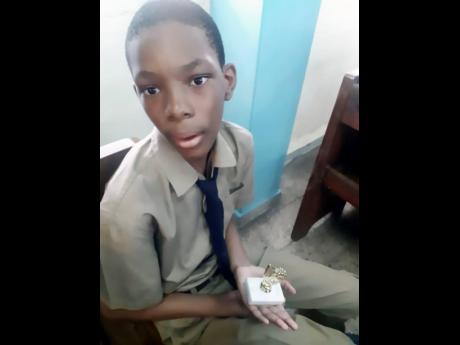 Lushane Campbell, 11, had his family members' world spinning when he contracted the dengue haemorrhagic fever recently.

His grand-aunt, Cecelia Campbell-Livingston, said that he had to stop eating hard foods and started using a softer toothbrush.

It was like her grandnephew was put in a bubble that she didn't want to burst.

"Dem call me from him school like the Thursday, saying he was roasting with fever. I took him to a private doctor in the evening, then for the whole weekend, me up and down. Him go in the next Monday night and come out last Thursday night," said Campbell-Livingston, who has had Lushane since he was a baby.

Recalling the moments leading to his hospitalisation, his grand-aunt said that he had no appetite and she had resorted to giving him energy drinks.

While on the road purchasing drinks for him one day, her husband realised that Lushane was having problems breathing.

"Me rush him go May Pen Hospital. When they run a blood test, they found that his platelet count was low, and his liver enzymes high, and the doctor seh him have the dengue bad," said Campbell-Livingston.

She said that he was admitted in quick time.

"The ward he was in, they had about eight other patients, and all of them had the same conditions ... low platelet counts, liver enzyme high. So a basically there suh my eyes open seh it worse than me think. Every single one inna the room a dengue patient ... all children," she said.

When people do not have enough platelets in their blood, their blood cannot clot and they are at risk of bleeding to death.

"When the doctor tell me seh him have dengue, me burst into tears. I was there with his parents, and all of us started crying. And the doctor was like, 'Why yuh crying?' Him nuh understand that I know the reality," she said.

Campbell-Livingston said that she called her pastor.

"Me tell har wah gwan and she seh she a go get the prayer team together. Then me call him teacher, and she call fi har church people dem. So it was just like prayer round the clock. As a Christian, the prayer went a long way because he came out, leaving some children who were admitted with him the same night," she said.

To safeguard him against worsening effects, Campbell-Livingston did everything to shield him.

"The next day when the doctor was examining him, you see red spots on his skin. I couldn't give him any hard food because the platelet count low; they didn't want him to get any cut at all. So, not even apple him coulda get. I had to buy a softer toothbrush ... he couldn't get any cut at all," she said.

Lushane was discharged last Thursday, three days after being admitted.

"I knew he was going to get out. I woke up the morning and took out the clothes that he was going to wear home. I said, 'God, I'm putting my faith to test.' And it happened exactly that way ... he was released the same night after they did his blood work. I started rejoicing," she said. "It's was not pretty ... it takes a toll on you. I was speaking with some of the other parents at the hospital, and once yuh hear dengue, yuh just start stressing. It nuh mek yuh feel good."