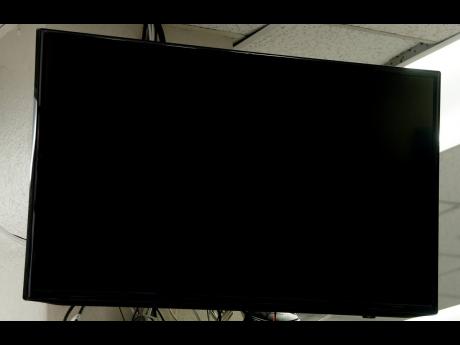 Lisa Danvers thought she was maximising on a Black Friday sale, but her money went up in flames, much like the 32-inch TV she bought from a handcart man in downtown Kingston.

Danvers told THE STAR that she purchased the Blackpoint flat-screen TV for $20,000 from a man she saw having a blow out sale from his cart. After installing the TV the same night, she said she was surprised when it caught fire just a few hours after she turned it on.

"Me hear something a mek a noise fi a while, but mi never really check it out. When me do get up and check, me realise that it a come from the TV. So me turn it off and realise seh me still a hear the gashing noise. Mi plug it out fi a while and it cool down, so mi plug it in back," she said.

The Rum Lane resident says the gashing sound only got louder.

"Me stay from inna the kitchen and hear it ... it get louder, and den me hear a pop pop sound. When me run inna di room, me see smoke. So me run go draw out the extension out a di wall fi kill di power. Den me see seh the back a di TV a light up. When mi look a fire! Me run go fi a jug a water and dash round deh," she recalled.

The 32-year-old young woman says she is in disbelief that she barely got to use the TV.

"So my money jus gone dung di drain suh? Di guy did a push one cart wid TV and DVD and it did cheap, so me buy the TV and a DVD. The DVD still working fine. I pay $20,000 for the TV out of my hard earn money ... dis don't make sense. What if my house did bun dung? What kinda crap is this? Di money can gwaan but suppose me did a sleep and bun up in yah?"

Danvers is of the opinion that she was hoodwinked by the vendor, as he told her the regular prices for a 32 inch Blackpoint TV is $50,000.

However, when THE STAR contacted appliance stores and inquired about the price range for similar televisions, the prices were far below $50,000.

Rainbow Bargain Centre on Orange Street, downtown Kingston revealed that the standard price for the same TV starts at $19,000. Kingdom Appliances and Furniture, also in Kingston gave the same figure.

"Me learn me lesson. Betta me di did bring me money go one store. Di ting is, mi nuh really know prices for things like that. Mi just think seh 20 grand was very cheap, but me learn me lesson," she stated in a sombre tone.

THE STAR contacted the Consumer Affairs Commission (CAC) for a comment, but was unsuccessful.