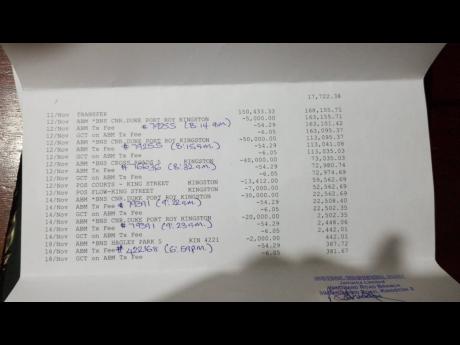 Last November when Ayoka Lawrence checked her account balance online, she was confronted by a dismal reality - it was $387.16.

"What happen is that when I went online and look at the account balance, I see some money missing, which I don't know of. My card was in my possession all the time ... I never give nobody my card, my PIN number, nothing at all," she told THE STAR.

Completely alarmed, the Norman Gardens, Kingston resident reported her dilemma to both the NCB and the Elleston Road Police Station.

"When I reported it to NCB, they said they see where my card was genuinely used," she said.

Lawrence's bank record shows that six withdrawals were made from the account on November 12 and 14 last year. Lawrence said that the police requested and obtained the camera footage of activities at the ATMs where the money was withdrawn. It revealed that the withdrawals were done by a young male.

Lawrence said that the bank is doing an investigation into the matter but she is yet to hear from them.

"From November I've been in debt. I will have to leave my house soon because I don't have rent for two months ... I can't pay my other bills. I have water bill and light bill to pay ... I have to be borrowing money from people and putting myself in more debt. I have a little online grocery business, and I can't do anything," she said.

When THE STAR contacted NCB on Friday, a representative said that the bank was not prepared disclose any information on the matter.