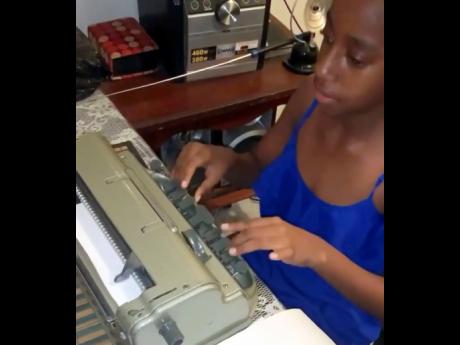 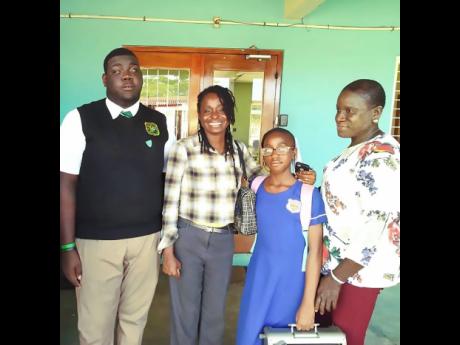 Since Friday, January 17, 11-year-old Destiny Morrison, who is visually impaired, is no longer in need of a Braille machine, as Calabar High School student Kimani Nunis followed through on his promise to donate his machine.

Nunis, 19, who is also visually impaired, handed over the machine to Morrison and her mother, Winsome Blair, at the Salvation Army School for the Blind.

"Who could it be but God? We would like to thank everyone who has shown concern for her and supported her. Many thanks to Kimani Nunis for his very charitable and honourable donation of this perfectly working Braille machine. Destiny is now able to complete her homework and assignments efficiently and effectively. All the glory belongs to God," Blair told THE STAR.

She was taken by surprise when her daughter told her that she remembers Nunis from when he was younger and attending the Salvation Army school.

"I am grateful. I can't thank him enough. He said he knew Destiny from the same Salvation Army School for the Blind from when she was younger. He was very pleasant, and he told me that it is a pleasure to give her the machine," she said. "Destiny remembers him, too ... she told me that she knows him, but I don't know him. Usually, I would just drop her off at school and pick her up, so me nuh really know everybody at the school. It looks like when Destiny start the school, he was leaving or in his last year."

Meanwhile, Nunis says that gifting Destiny with the machine was also a gift to himself.

"I feel very great, because I challenged myself do this and I actually pulled it off. The little girl was very ecstatic because as I gave the Braille machine to her, she gave me a big hug. The mother was very grateful and appreciative ... she told me thanks about a million times," he said.