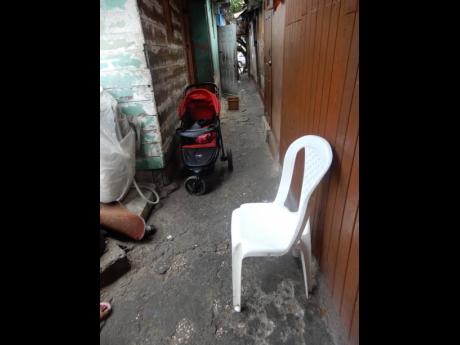 The chair on which the one-year-old sat waiting on her ‘morning tea’. 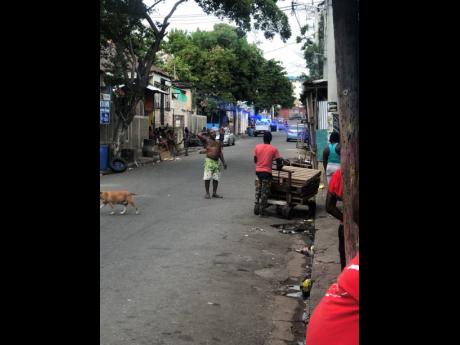 Police on the scene after a drive-by shooting on West Street. 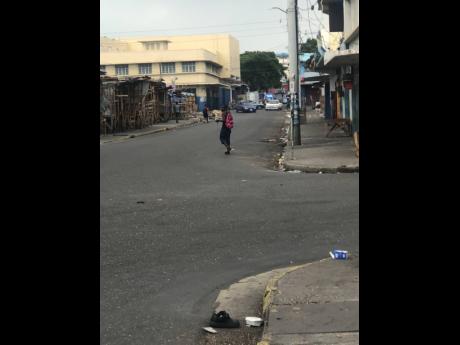 Police on the scene after a drive-by shooting on West Street.
1
2
3

A one-year-old baby girl who sat waiting for her breakfast early Sunday morning at her grandmother's home on West Street in downtown Kingston was hit by a stray bullet after gunmen attacked another resident.

The baby was rushed to the hospital where she underwent surgery. According to her mother, doctors told her that it's a 50-50 chance as to whether her baby will be able to walk.

According to reports, some time after 7 a.m., two men riding bicycles approached 43-year-old Andon Robinson, and shot him multiple times.

Robinson, who was a vendor on West Street, ran for his life. He crossed the road and approached the yard in which the baby was seated. The men continued to fire at him.

"The man get shot and the man dem run him dung go over the front of the yard," one resident said.

The baby's grandmother told THE STAR that no one realised that she was shot.

"It happen right here in the yard. I don't even know what went through my mind. Me never know seh she get shot! Nobody never know. She was sitting in a chair in the yard a wait pon her tea," she said.

Robinson, who eventually collapsed in the yard, captivated everyone's attention. The grandmother says the baby's mother was the one who realised that the infant, who was still sitting in the chair, had been shot.

"Then she grab her and run out a road and start bawl seh the baby get shot," said the grandmother.

One neighbour who was on the scene says "Everybody traumatised ... right now me fraid, me nah tell no lie! Blood did deh all ova the baby pampers! The baby conscious and a bawl ... after a while, she just knock out."

According to the Corporate Communications Unit (CCU), "the police were alerted and they (the gunshot victims) were taken to hospital where Robinson was pronounced dead and the little girl was admitted for treatment in a stable condition."

Hours later, a drive-by shooting took place within the community, sending residents and vendors scurrying to safety. Nobody was injured and police were quick to the scene.

Since February 2020, shootings and gun-related deaths have proliferated across the island. Between February 19 and 20, nine people were killed by gunmen, five of whom in zones of special operations (ZOSOs).

Last Saturday, the United States Embassy in Jamaica issued a travel advisory, cautioning Americans against travelling to violent parishes in the island.

Kingston, St Andrew, Clarendon and St James were the red flag parishes highlighted in the advisory.

US citizens were advised to stay clear of some of the following Kingston communities: Cassava Piece, Mountain View Avenue, Hagley Park Road and Old Hope Road.

Clarendon was specifically highlighted, as Americans were told to stay away from the parish all together, except when passing through the parish using the T1 and A2 highways.