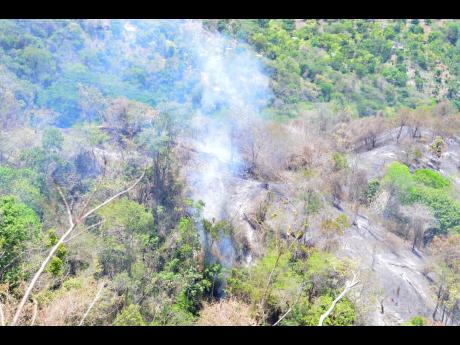 Scorched earth, dead three trunks and smoke are all that is left of a section of Somerset in rural St Andrew after a bush fire destroyed the vegetation and left some farmers mourning the loss of their produce. 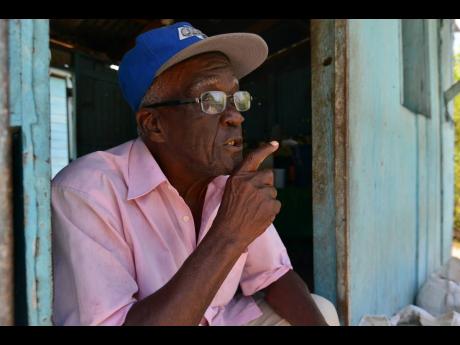 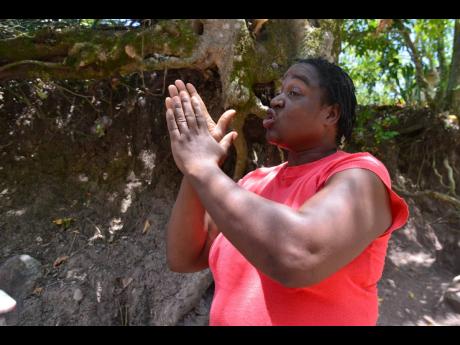 Beverly Graham, an overseer for the Somerset Seventh-day Adventist Church in St Andrew, recounts how community members had to pool together and saved the holy house from being consumed by fire.

"The women and men from the community and children alike, we did everything from day up to last night to keep the fire under control," she said. "I had to be in the fire from Monday evening at about 4 o' clock straight to 3 yesterday morning just to save the church."

A wild, bush fire has been affecting properties and farmlands in Somerset, St Andrew, for the past few days. Many farmers have been left without their livelihood because the fire has been escalated by a parched terrain due to a drought. Most of the residents are now looking towards a better, smoke-free tomorrow.

Graham says it was around the clock shift, as the fire was intermittent.

"When I reached home, I only got a few hours sleep, because by 5:30 a.m., I had to be up carrying water and outing fire."

She blames the fire brigade, saying it was not of any help during their dilemma.

"I have to be on the phone making calls and trying to get help," she said. "The firemen came after 12 a.m. on Monday, and they spent like an hour and said it is controlled. They didn't bring any equipment. They said it's about 50 feet from the church, so that's good. And just after they left, it picked up again. It was very terrible and really scary."

When THE STAR team visited the community, Daniel Lynch was sitting outside on a bench, isolated from other community members who had congregated.

"Me nuh know wah ah go be the next move," he said with teary eyes. "The fire start Sunday after the 3 o'clock curfew and we affi break the law and come try save we things. But it rough ... me nuh save nothing! Me hope somebody can give me ah help ... me not even know weh me a go get back seed fi plant. Me just glad how it nuh take no life still," the 52-year-old added.

"It bun me out wicked," he told THE STAR. "All ah mi farm bun out clean! Only little rain can save me now. Me did have banana, papaya, cane, gungo peas, nuff things me did have ... all ackee tree. Nothing nuh lef pon the farm."