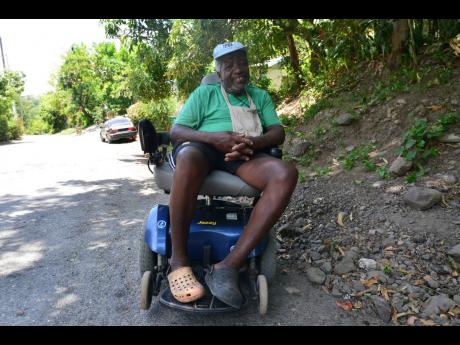 Timothy Henry, 63 years old, has spent the last 34 years reminiscing on how fulfilling his life was when he was living his dream as a farmer. The Ramble, St Thomas resident planted tobacco among many other crops in his younger days, before he became crippled.

"I did have some sickness that affected mi cervical spinal cord from long time and now I can't walk," Henry told THE WEEKEND STAR. "The problem started when I was a teenager. I haven't been able to walk from I was 29 years old.

"I wasn't scared at all, none of that. I went to the hospital and did many check-ups. The doctors did tell me about the possibility that I wasn't going to walk again, but I wasn't afraid. My family was nice and supportive and all of that, but it was hard."

Green says it was very heartbreaking to give up farming.

"It was hard for me too because I realised that food hard fi come by," he said. "It wasn't so nice at all. I was doing some large-scale farming right here in Ramble before all of this.

"First, I used to plant tobacco and I also had a vegetable farm with things like pak choi and callaloo. I also had some cows rearing."

Ever since, Green has felt an insatiable longing to be back in the fields. He misses reaping, tilling the soil, and pruning the plants.

"I still do a little thing now," he said. "I plant a little banana, but not as big as I used to. I miss the days when I used to have my farm with a lot of plants. Because now, things that I used to be able to do, persons have to be doing it for me, and sometimes they cannot do it the way you want.

"Mi can't do much, but if I could do the work again, I would do it and make some man on foot shake. It neva hard. Ah just the mind, you have to put your mind to things. Farming is not hard."