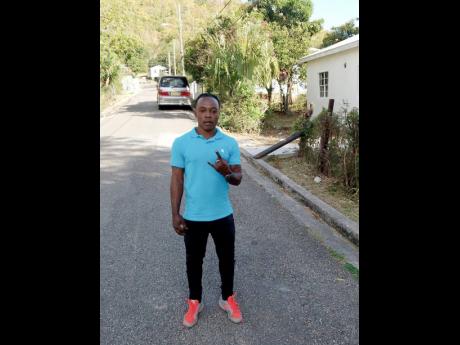 Last week, THE STAR reported the plight of Jamaican footballer Dashawn 'Taka' Stanton's family, as they tried raising fund so he could return to Jamaica for urgent medical treatment. However, before they could accumulate the US$20,000 to have him transported to Jamaica on Air Ambulance Transportation, Stanton passed away last Wednesday, about 9:30 p.m.

According to Pashique Thompson, Stanton's sister, a candlelight vigil wiould be held for him on Friday, September 4, in Danvers Pen, St Thomas.

At the time of his death, Stanton was in the Intensive Care Unit at Mount St John's Medical Centre in Antigua.

He was unresponsive, his breathing level had dropped, and he had to be on a ventilator machine. Doctors told his family that he had a 40 per cent chance of waking up.

Stanton fell ill on August 14 after he started experiencing severe headaches. After tests revealed he had an infection around his brain, Stanton, 25, who played for Tivoli Gardens Football Club in Jamaica, fell into a coma after his condition worsened.

An official page for the Drahz Old Road Football Club, an Antiguan football team for which Stanton played after moving there, shared some kind words for his family in Jamaica.

"On behalf of the management and players of the Drahz Old Road Football Club, we would like to express our deepest condolences to the family of Dashawn 'Taka' Stanton. Dashawn was a player of the team for three years as a midfielder and in his time with us, memories ... they were all worth cherishing. Rest easy Taka," the post read.

Meanwhile, Chelsey Browne, coach of the team, told the Antigua Observer that the team was devastated by Stanton's passing.

"He's one of the shortest guys on the team but he's like the tallest when it comes to playing the game. He brought a lot of class to the Old Road team and all the youngsters looked up to him," Browne is quoted as saying.

In a Facebook post Thompson dedicated to her brother, she wrote: "You're always at your peak when it comes to football and anywhere you went, you played your best game. This was a next family you found in Antigua. You love what you do... this is your passion."

Thompson spoke with Stanton for the last time on Tuesday, August 18, before "things turn for the worse."