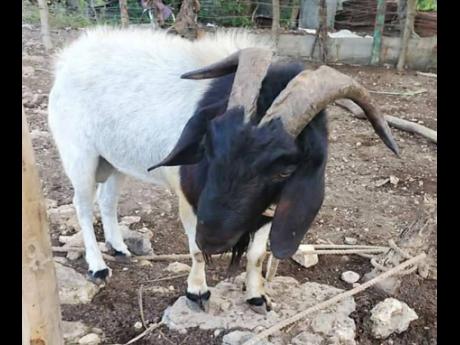 The owner of this ram said it is feared by many persons in Effortville, Clarendon.

The owner of one of Clarendon's most feared goat is trying to part ways with the animal, which he said could take the place of any guard dog around the home.

Richard 'Sashy Dread' Joseph, owner of the goat, which he calls Checka, said has decided to rid himself of the animal because it is becoming increasing vicious.

"Right now mi can't even take mi eye offa him ... . The last couple a time mi take mi eye off him, and like him watch mi and realise, him buck mi straight dung a grung, so mi kinda a get fraid a him. Plus, him a take up a whole heap mi time because mi have to be watching him," he said.

Joseph said he has lost count of how many persons Checka has attacked, stating that the ram goat drives more fear into some persons in the tough community of Effortville where it now lives.

"Checka buck down dozens of people until mi kinda lost count. Is a good thing mi live good with people or else him would a cost mi a lot of money for damages. Right now people fraid a da goat yah more than gunman in the community," the owner said.

He estimates that the goat, which is a cross between the Alpine and Boer breeds, weighs about 100 lb. He is prepared to part with the animal, through a raffle, adding that he has not been able to attract buyers for the animal because of its size.

"Anybody who a buy Checka don't need no form of security at all because him play da role deh good. Nobody nah guh can come in dem yard so easy. A tief can tame a dog and him cold up, but not dis goat at all. Is a badman goat so di big head pit bull dem is no match for him," he said between laughter.

"Mi a guh miss him when him gone cuz a mi little security, but mi a get fraid a him and the people dem in the place fraid a him too. Mi apologise fi all a who him buck down, and mi know what mi a guh give some a dem after him sell is not much, but mi just wa give back summen," he added.