KD may serve again as senator if asked 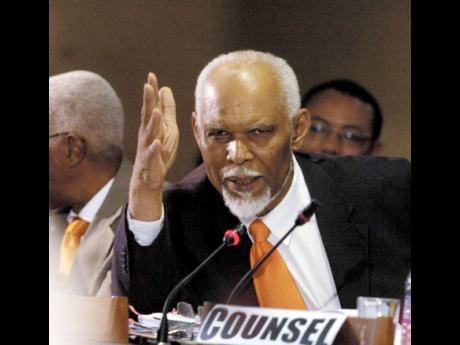 K.D. Knight's popular expression, 'pack your bags and go', was directed at him this week after he was heard in a leaked voice message complaining about the practice of buying votes, which he intimated was a major reason the Jamaica Labour Party (JLP) won last week's general election.

Following the leaking of the voice notes, Knight's detractors likened him to a sore loser and suggested that he take the advice that he gave former prime minister Bruce Golding a few years ago -- "Pack your bags and go".

But, when contacted yesterday, Knight, who walked away from representational politics in 2007 after serving four terms as member of parliament (MP), says he may very well continue serving as a senator.

"I didn't ask to go in the Senate. I was asked by Mrs Portia Simpson Miller, the party leader then; and I was asked by Dr Peter Phillips, and I responded positively. It is not my decision. If asked, I will say yes, or I will signal that I don't want to be asked," Knight told THE WEEKEND STAR.

Meanwhile, addressing his leaked voice note in which he made mention of vote buying in the just-concluded general election, Knight said that context is important. "It was sent in a WhatsApp group of supposedly North East St Catherine PNP supporters, and I was responding to people who were complaining about vote buying. If the series of postings (voice notes) I made about the practice of buying votes were leaked, then one would've understood that I wasn't saying the victory of the JLP was solely premised on the buying of votes," he said.

In the three-minute voice note, Knight can be heard saying: "Much of the money that the Labourites spent in this election was money that they stole from the people themselves. They stole that money and they stored a part of it to use in buying votes."

But Knight says he wasn't being bitter or bashing the Jamaica Labour Party. Instead, he was educating the members of the WhatsApp group, who he has never met, that vote buying should never be commonplace in Jamaican politics.

"It's not a bashing of any party. I was more bashing my people, because I don't expect them to be so caught up in the practice of vote buying. I expect them to be of certain standards. But the way they were behaving ... saying the 'PNP caa win because them too mean'... 'dem nuh wah let off nothing',"he explained to THE WEEKEND STAR.

He says the expectation that candidates are to 'let off money' to secure their seats is worrying.

"It is preventing anybody of meagre means from becoming an MP. Unless you are going to owe money or your ideals are misplaced, how are you going to come an MP? Where are you going to get money to buy vote? They were basically saying, 'If JLP a buy vote, why your party caa buy vote?'"