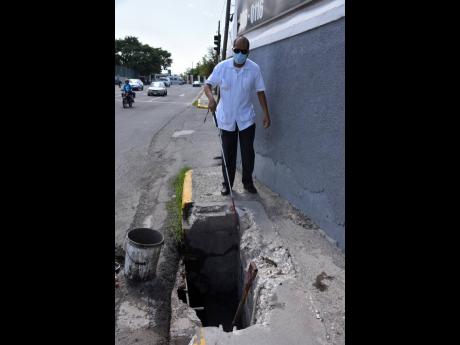 Vivian Blake shows how difficult it is for the visually impaired to navigate around this hole in the sidewalk. 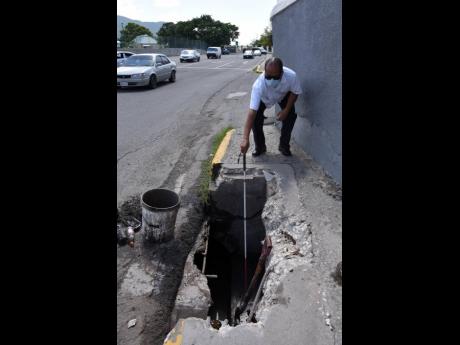 Using his white cane, Blake shows how deep the hole is.
1
2

Vivian Blake narrowly escaped what he believes would have been a deadly fall last Monday.

Blake, who is visually impaired, told THE STAR that he almost fell in a hole in the sidewalk along Caledonia Avenue in Kingston.

"Had it not been for the person who called out to me and I decided to stop and she pointed out where the hole was, I would have fallen into it," he said. "Me nuh wah dead. Maybe if me drop in a that me dead. In the moment, out of curiosity, I put my cane down there and I couldn't feel the bottom of it."

Blake, who works on Arnold Road, usually traverses Caledonia to get to Cross Roads, but he has changed his routine.

Should have the choice

"But I should have the choice. Me walking is my way of getting my 20 minutes of 'Jamaica moves' because I don't really have the discipline to exercise regular," he told THE STAR. He is also particularly concerned about other visually impaired persons who frequent the roadway.

"What about the person who might not be able to make the choice? My concern is that the next person who is blind may not know about the hole and fall in it," he said. "I also heard about another blind person who fell in a gully and lost 18 of his teeth. I just really want my other colleagues who are blind to know that it is there before somebody gets hurt."

His plea is for the National Works Agency (NWA) to move with some urgency to correct the problem, even putting up barriers around the hole for now.

"I don't expect them to fix it in one day as I know those things take time," said Blake. Manager, communications and customer services at the NWA, Stephen Shaw, said his team will be investigating.

"We always investigate and sometimes persons make calls and we go to look and we can't find what they are speaking about, and that is the challenge," he said. "I suggest the person call the NWA office and speak to the officers there so we can get some more details."