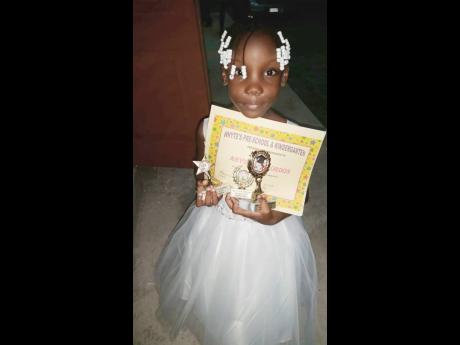 Seven-year-old Abysenya Gordon with her awards from the last prize- giving ceremony.

Abysenya Gordon is just seven years old, and to the amazement of her family, is spelling words most adults cannot even pronounce. For example, she can spell the longest word in the English vocabulary, and could do so after just seeing it once.

The word, which is 45 letters long, 'pneumonoultramicroscopicsilicovolcanoconiosis', refers to a lung disease contracted from the inhalation of fine silica particles.

"I don't even remember how to pronounce it. I was actually on the Internet looking for some words for her brother and I came across it. About one day later, she was spelling the word," Trudiann Bailey, her mother, told THE WEEKEND STAR.

The Clarendon resident says she noticed that Abysenya was not an average kid from she was about two years old. And now, she is interested in getting a Spelling Bee coach for her.

"I remember her knowing all her aunts, uncles and grandparents' first and last names from she was just two. So, I was saying, 'Something [is] special about this child'. And I realise that she's good at the big words. She can spell all of them easier than the small words," she said.

Abysenya was attending White's Preschool and Kindergarten before her mother moved her to Free Town Primary School in January.

Before being transferred, she wasn't a stranger to getting multiple awards and high-achievement certificates.

For the last school term of 2019, she was named Best Speller, Best Reader, and Most Outstanding among the students.

"Her teachers at her previous school always said she was really smart and loved her. The school she is at now, she never really went there for too long. She started in January and school closed March. When I brought her there to take the exam to enter the school, she knew everything. She was reading every chart ... everything. The teacher was like, 'She's smart'," she said.

Bailey recalls several instances where she was astonished at her daughter's sharp memory.

"One evening we were coming from school and she said, 'Mommy, can you spell 'blouse' for me?' and I told her to pronounce the word and spell it. She was about three at that time and she did. About three days after, I told her to spell the word for me again and she spelled it. I was like, okay ... she has a good memory as well," she said.

"She came home one day and said, 'Mommy, can you go on the Internet and find all the animals for me? Because we were taking about animals at school.' I wrote down the names of animals like hippopotamus, all of them. And she knew how to spell them," she added.

Marjorie Christie, Abysenya's past teacher at White's Preschool and Kindergarten, described her as sharp.

"Working with Abysenya, she was a very smart student. She's very enthusiastic towards learning ... she's quick, she grasped concepts very quickly and she applies herself. She's a leader, that's for sure," Christie said.

"She's a very intelligent student. She got awards for reading, spelling, and she was among the set of top students for the different subject areas."