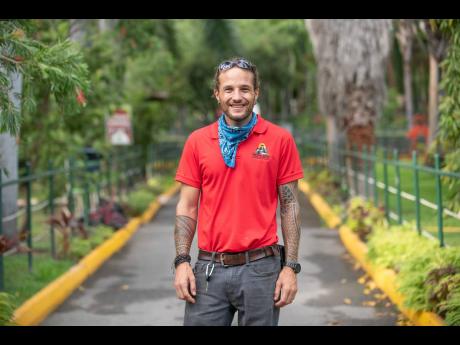 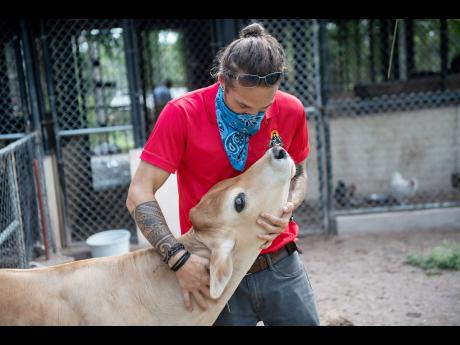 Brown pats Patches, a calf who came to the Hope Zoo after being rescued from a slaughter house.
1
2

For anyone who knows him, it comes as no surprise that Joseph 'Joey' Brown is the curator at the Hope Zoo, as his attachment to animals started from early childhood.

And from his home in Kansas, in the US, that passion has led him to Jamaica.

When THE STAR visited his office at the Hope Zoo yesterday, he greeted the team with the words, "I caught a crocodile today!".

Although his pants showed a wrestling match had ensued, Brown stood beaming with pride, eager to introduce us to the intricacies of his job.

As a curator, his duties begin at 6 a.m. daily, making checks on approximately 1,100 animals housed at the zoo. He also has to seek out new animals to add to the current group.

He is in charge of the management of the grounds and is the general overseer of a team of 10 zookeepers and a veterinarian.

He said the best part of his job as a curator is the fulfilment to share his love for animals with the general public.

"Obviously, COVID has changed it up a bit because it is normally packed with school children, but when you see the animals in person as opposed to what you see on TV, it's a totally different feeling. We want people to have a better connection with the animals in the zoo and also animals in wildlife," he said.

He is using his job to spread awareness to Jamaicans and dispel misconceptions they have about wild animals, specifically crocodiles and lizards.

"Persons are very fearful of the tiniest of lizards but actually they are more afraid of us. If you leave them alone, they're going to go and do their own thing. They don't want anything to do with us," Brown explained.

He recounted doing an autopsy on a crocodile recently, where the stomach was bulging full with plastic bags. This he said, is a serious problem.

"Plastic is ruining our world right now and it's killing our marine life and it's going to be affecting us soon," he said, adding that he is dedicated to the fight for wildlife protection.

"There is habitat destruction taking place all over the world, especially with crocodile and other reptiles. They have a bad image but they are critical for the ecosystem and I want to do what I can to protect them and to educate more about them," the University of Kansas graduate said.

His job doesn't seem to lack excitement as there is non-stop interaction with the animals, which promises something new every day.

"This opportunity as curator presented itself but it's a very enriching career. I get to do what I love, working with animals and people. My future plans, I want to expand and improve our work here. I want to build a professional wildlife rehab centre, not just accommodating crocodiles and iguanas," Brown said.